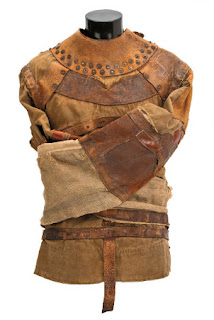 The Houdini straitjacket authenticated by magician Murray SawChuck on a recent episode of Pawn Stars will be auctioned by Christie's in London on November 23, 2011. The sale is 6214: Pop Culture: Film & Entertainment Memorabilia. The straitjacket is Lot 71 and the auction estimate is $23,000 - 30,000.

The auction also features several other Houdini items, including a curious green sack (Lot 70) that is simply described as "used by Harry Houdini for escapology tricks circa 1915." As it references the straitjacket lot for provenance, it appears this belongs to the same seller. Could this be the sack used during Metamorphosis? The sack carries an estimate of $1,600-2,300.

The straitjacket -- which I'm convinced is indeed the straitjacket Houdini used for several of his suspended escapes -- was given to the seller's grandfather, Paul J. Campbell (a salesman for Fleetwood Coffee), by Houdini's brother Theo. Hardeen "in late 1927 or early 1928." It has been in the family ever since.

The jacket first surfaced in the popular TV show Pawn Stars where star Rick Harrison made an offer of $25,000. The owner refused and instead listed it on eBay with a starting price of $149,000, where it cycled several times unsold. 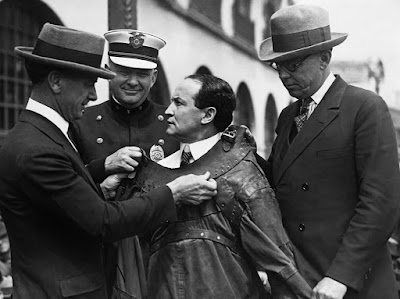 Looks like the auction house has carried forward the misdating of the photo of Houdini in the jacket as 1915. According to Patrick Culliton, it's more likely 1923 (and I concur).