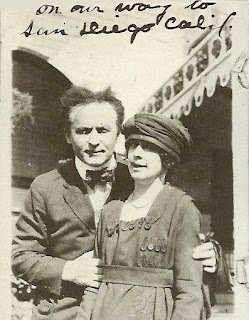 The new book The Way We Were in San Diego by San Diego Union-Tribune columnist Richard W. Crawford contains a chapter about Houdini's one and only (professional) visit to the city in October of 1907.

Crawford recounts how Houdini performed at The Grand Theater on Fifth Street on Oct. 7, 8, and 9. During his engagement he escaped from a packing crate constructed by Marston's Dept Store. Crawford has also uncovered a notice (reproduced in the book) saying that Houdini would dive handcuffed from the top of Spreckle's wharf into San Diego Bay. However, for reason's unknown, Houdini didn't do the escape. [See update.]

Purchase The The Way We Were in San Diego by Richard W. Crawford on Amazon.com.

Photo of Houdini and Bessie "On our way to San Diego, Calif" from Houdini His Legend and His Magic by Doug Henning.

UPDATE: Turns out Houdini did do the San Diego stunt.  Read: Proof of Houdini's daring dive in San Diego.
Written by John Cox at 8:20 AM