Haldane screening to open 'Magicians on Screen' retrospective in NY 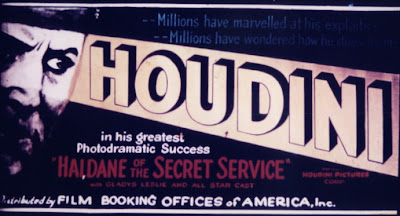 The Museum of the Moving Image in Astoria, NY will screen Houdini's Haldane of the Secret Service with live music by Donald Sosin on Saturday, December 10, 2011 at 5:30 p.m. The screening is part of the opening day events for their new retrospective, Magicians on Screen.

This is a new 35mm preservation print of Haldane provided by George Eastman House, with funding from the National Endowment for the Arts. The screening will also feature a 7 minute short by video artist Terese Svoboda, The Talking Tea Kettle, which explores Houdini's and David P. Abbott’s battles against fraudulent mediums.

Preceding the screening will be a live magic show by Ben Robinson (4:30pm) and a presentation by Matthew Solomon on "Early Film and Magic" (3:00). Solomon is the author of the excellent Disappearing Tricks: Silent Film, Houdini, and the New Magic of the Twentieth Century.

Magicians on Screen runs through January 1, 2012. You can see the full line-up of screenings and lectures at the The Museum of the Moving Image website.
Written by John Cox at 9:19 AM