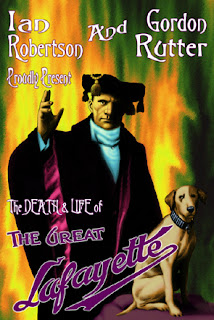 A few dog related items today. First, even though it was released back in May, I only now just discovered this biography of Sigmund Neuberger aka The Great Lafayette.

Lafayette, who was killed in a theater fire, was utterly obsessed with his dog, Beauty, a gift from Houdini in 1899. In fact, Lafayette was buried with Beauty in a lavish funeral filmed by Houdini.

This book appears to be self-published. At 100 pages, I can't vouch for the content, but at least the cover features Beauty. Lafayette would have approved! You can order The Death and Life of The Great Lafayette by Ian Robertson and Gordon Ruter at New Lands Press.

Also on the dog front today, Kevin Connolly has posted on his blog an unpublished photo of Houdini's dog Charlie with Joe Hayman, one of the original "Brothers Houdini." Charlie is the white Pomeranian said to have been a gift to Harry and Bess by the Grand Duke of Russia in 1903. Check out the pic of "Houdini's Pooch and Pal" at Houdini Himself.

And finally, there's THIS.

If that's still not enough canine action for you, can read more about Charlie, Bobby (dog #2) and Houdini's other pets HERE.
Written by John Cox at 10:39 AM