Magic Castle fire: "I think Houdini had a hand in that." 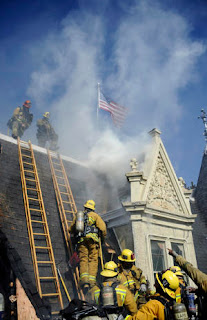 The Magic Newswire has a special podcast interview with Magic Castle owners Irene Larsen, Erika Larsen, West McDonough and Milt Larsen about the Magic Castle fire on Halloween. Not only do they provide a first hand account of exactly what happened, but you gotta love it when Irene says:

"I think Houdini had a hand in that. Because we had so much publicity, we were on every news station all day long and even the next day. I mean, it's not the publicity you're looking for, but you know how Houdini loved the publicity [laughs]."

Even Milt chimed in on the Houdini connection:

"That was the anniversary of Houdini's passing in 1926, and one of the rooms that wasn't even touched by the fire was our Houdini Room, so you kinda wonder about those kinds of things. It probably started right around the time that he died so...spooky!"

Listen to the entire interview at The Magic Newswire.

The Castle is currently open Wednesdays through Sundays while repaires are underway. Updates will be posted on the official Magic Castle website.
Written by John Cox at 5:13 PM