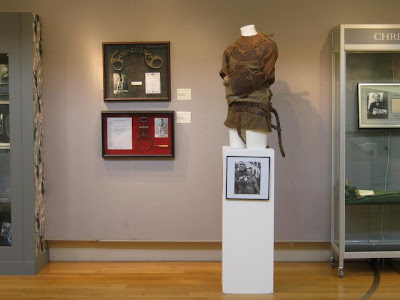 The owner of the authenticated Houdini straitjacket that will be auctioned by Christie's in London on Wednesday (Nov. 23) has shared via our Facebook page this terrific photo of the jacket on display along with other Houdini artifacts. The sale is 6214: Pop Culture: Film & Entertainment Memorabilia. The straitjacket is Lot 71 and the auction estimate is $23,000 - 30,000.

Among the auction's other Houdini items is a curious green sack (Lot 70) that is simply described as "used by Harry Houdini for escapology tricks circa 1915." Could this be one of the sacks he used during Metamorphosis?

Click here to have a look at Christie's ecatalogue. The Houdini items are listed on page 20.
Written by John Cox at 9:48 AM