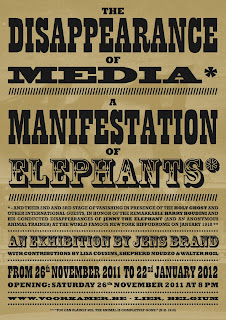 A modern art exposition by German artist Jens Brand called "The Disappearance of Media: A Manifestation of Elephants" is set to open at VOORKAMER in Lier, Belgium on November 26, 2011. I'm not sure I entirely understand this exhibition, but from the advertising material it's clear enough that it celebrates Houdini's Vanishing Elephant, and we like that!

Jens Brand’s installation re-stages Harry Houdini’s famous performance “The Vanishing Elephant” from 1918. The magician was one of the first super stars of the early days of media communication. The installation at Voorkamer can be understood as a tribute to that remarkable king of magic but also as a will to meet the audience’s level of expectation. - It can be read at as a tribute to reality.

The exhibition also includes the YouTube video, Not Pictured: Bill Goodwin by magician Lisa Cousins (who recently gave a talk on Houdini and Valentino). In fact, Lisa is the one who alerted me to this exhibition and provided the flyer -- so thank you, Lisa!

"The Disappearance of Media: A Manifestation of Elephants" will be on show through January 22, 2012. You can check out more at www.voorkamer.be.
Written by John Cox at 4:36 PM