The Secret Advenures of Houdini

The first book in a new Houdini graphic novel series, The Secret Adventures Of Houdini, is due for release in December 2011. The series is written by Todd Hunt with illustrations by Sean Von Gorman, and finds Houdini in supernatural adventures during the final years of his life. Here's the full description of Book 1 from the official Facebook page: 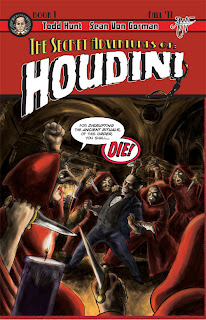 In the blink of an eye Harry Houdini, a name synonymous with magic and mystery, will have his world forever changed. Armed with a stinging wit and near super-human strength, we follow Houdini’s descent into the secret world of the supernatural.

Our first story begins in New York City where Houdini invades the lair of a supernatural sect determined to raise the spirit of an undead evil saint; Thascius Cipriano. What Harry finds may force him, for the first time in his life, to question his resolute disbelief in the existence of the genuine supernatural. After years of debunking false spiritualists, Harry Houdini is suddenly inducted into a world, which unceasingly challenges his every belief.

Escape with Houdini into a world of magic and sorcery as we witness his greatest metamorphosis from stage magician to hero.

These are the untold stories of the final years of Harry Houdini’s life.


The Secret Adventures Of Houdini can be purchased at IndyPlanet.com, where you can also see several sample pages. Also check out the official trailer below, and watch for my own review coming soon.