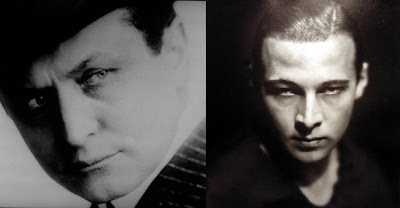 At this year's annual Rudolph Valentino Memorial Service held at the Hollywood Forever Cemetery in Hollywood, CA, magician and historian Lisa Cousins (who performed during the Magic Castle's History Week) gave a talk on the connections between Houdini and Valentino. Something I didn't know was that Houdini attended the funeral of Valentino, who also died in 1926. Unfortunately, I missed the event, but Lisa kindly sent over the transcript of her talk. I thought this was just too good not to share, and Lisa has graciously allowed me to reprint it here, so enjoy.


The Magic of Valentino 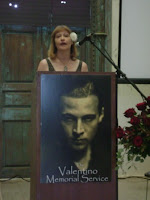 There are few people in history whose very name stands for a concept, and Valentino is one of them. To say “Valentino” is to say “Lover.” Valentino is in our language, Valentino is the universally recognized code-word for the utmost in romantic passion

Another name on that short list is Houdini – and in support of my premise that everybody knows what that name means, I’m not even going to bother to explain it. “Houdini.” We’re all clear, right?

I’m from the magic world – which is Houdini’s world – which is a world of skeptics. During the 1920’s Houdini made a specialty of debunking séance-parlor manifestations, proving them to be mere magic tricks

In the same era, Valentino was among those who were actively experimenting with spiritual phenomena. He described his interest in ghosts and the afterlife as being “that of any well-read person.” He wrote “I am not afraid of the dead, or of ghosts. I am not afraid of anything pertaining to the life beyond. And it’s not because I don’t believe in it. It’s because I do.”

Through his experiments with séances and automatic writing, particularly with his second wife Natacha Rambova, Valentino came to believe that he had three spirit guides: an ancient Egyptian named Meselope; an American Indian named Black Feather; and perhaps most significantly, “Jenny.” Jenny was Virginia Mathis, the mother of his good friend June Mathis, who had recently died. It was Jenny who Valentino continuously addressed during his final illness, and you can see her tomb – the crypt of Virginia Mathis – catty-corner from Valentino’s in the corner of the mausoleum

When Valentino died in 1926, Houdini attended the funeral in New York, and then Houdini himself died that Halloween, just a few months later. Both men immediately became popular figures with séance mediums and others who were interested in receiving a message “from the other side”

Although Houdini had never encountered any spiritual phenomena that he could not prove to be a magic trick during his lifetime, he had made a famous promise to his wife Bessie that if there was any way to return from the grave, he would be the one to do it. His long career of proving that he could escape from any restraint made this promise seem appealingly plausible

For ten years his widow conducted a séance on Halloween, the anniversary of Houdini’s death, in an attempt to contact her husband, until the dramatic final séance, which was held in 1936 on the rooftop of the Knickerbocker Hotel. On that occasion Mrs. Houdini declared that she had not received a message, and that she expected she never would. This of course did not stop others from persisting in the attempt, and to this day people gather every Halloween and try to receive a message from Houdini.

After Valentino’s death, numerous people began to report spirit contact with him, including his ex-wife Natacha Rambova, who claimed that she had received reports from her ex-husband concerning his condition on “the other side.” Many of the people who visited Valentino’s tomb in the early years after his passing said that they were drawn there due to spiritual messages from Valentino. In subsequent decades a “voice medium” named Leslie Flint claimed that Valentino spoke through him, and he conducted many sessions where he channeled the spirit of Valentino

As I said, I’m from the magic world, and I’m going to close my remarks with a magic trick. It’s a séance-parlor classic that Houdini could explain to you in a blink; however, I’m going to attempt to receive a message from my fellow believer, Valentino.

It should be said that in the 1920’s these type of slates were common, everyday objects. Now when you see them, they do seem to be “for séance use only.”

The idea is that the medium – in this case, me – displays the slates as being empty on both sides. The slates are then bundled together and tied securely so that no human agency can get to them. A piece of chalk is provided for the spirit’s use, and the entire packet is isolated where no one can touch it

[Slates isolated on a chair before the podium.]

To summon the spirit of Valentino, I’m going to quote the author of “A Tribute From the Mothers of the World to Rudolph Valentino,” and join her in her praise of his “portrayal of a love so healing, helpful, and sustaining in its whole-heartedness…” that it can – perhaps – turn eternal death into a night of glorious dreams

Let us see if we have received a message from Valentino