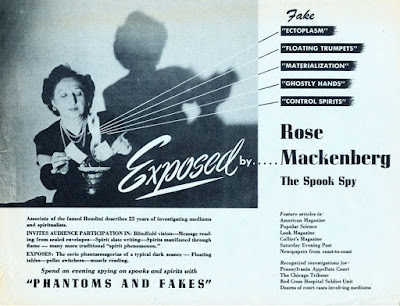 Here's something intriguing. A seller has listed on eBay what they claim is Houdini's crystal ball along with memorabilia from Houdini's chief spiritualist agent, Rose Mackenberg, including a copy of her unpublished manuscript, So You Want To Attend A Séance? Here is the auction description:

YES – this is the real thing. It has been a family treasure for many decades. 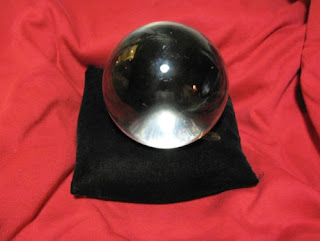 Harry Houdini – the famous magician and escape artist owned this crystal ball. [...] After his death the crystal ball belonged Houdini’s associate, the woman known as “The Ghost Detective” and “The Spook Spy” - Rose Mackenberg. The extraordinary career of Rose Mackenberg began during the 1920’s when, as a private detective in her native city of New York, she consulted the famous Houdini on the case of a fake medium. Her successful trapping of the culprit brought an invitation from the great Master of Escapism to join him in his crusade against spiritualists who were falsely leading innocent victims into bankruptcy and unhappiness. From then until his death, Harry Houdini, employed Rose Mackenberg as his detective to travel from town to town ahead of his show posing as a believer, while actually investigating what the local mediums were up to and if any of them might somehow be legitimate. Houdini had publicized a prize of $10,000 that he would give to anyone who could convincingly prove before a distinguished jury of notables that he or she was able to contact spirits from another world. The fortune was never claimed.

In all the years she worked for him, Miss Mackenberg’s efforts only produced one expose after another of charlatans feeding upon the sorrows and misfortunes of a gullible public.

Later Miss Mackenberg toured the lecture circuits speaking on “exposing the tricks of the spiritualist trade.” She also continued her detecting on behalf of Chambers of Commerce, newspapers, Better Business Bureaus and other civic institutions across the United States.

Miss Mackenberg became friends with Virginia Myers, daughter of the famous American artist Jerome Myers (whose works can be seen in over 90 museums throughout the U.S.). Virginia was famous in her own right as a dancer, both in one woman performances at Carnegie Hall and in Broadways shows. Miss Mackenberg gave a signed photo of herself – “To Virginia a swell gal & a good pal. Sincerely Rose, New Year’s Day 1951.” Viginia Myers was the mother of my husband.

Rose Mackenberg, in her will, bequeathed to Virginia Myers the Houdini Crystal Ball as well as photos, lecture programs, newspaper and magazine write-ups, etc. More importantly, she left to Virginia the only (as far as we know) original, manually typewritten final draft of her manuscript relating her experiences working for Houdini and the intimate knowledge she gained of the whole panorama – “So You Want To Attend A Séance?” Copies of all available material will be included with the Crystal Ball. (Publishing rights not included.)

Houdini’s Crystal Ball is shown on a 5” x 5” black cushion. The Ball itself is approx. 3 ½” in diameter. It has a few tiny flaws and scuff marks, all of which attest to its long, well used life. Feel free to contact us with any questions.


I'm not sure what to make of this. The seller does provide nice provenance, but there is no account of Houdini owning a crystal ball of any kind. He doesn't strike me as a crystal ball kind of guy, frankly. But this doesn't mean it didn't belong to him. Houdini owned and displayed several magic wands, but to my knowledge never used one himself (photos show he used a large baton).

I actually find the copy of Rose's manuscript, So You Want To Attend A Séance?, to be the more exciting and potentially more valuable item in this lot, especially as it is an unpublished manuscript (I've confirmed this with the seller). It could provide details of Houdini and Rose's investigations and relationship that we've never heard before.

One thing is for sure, the $25,000 price tag is a little...optimistic. Even if this crystal ball did belong to Houdini, that's a pretty steep number, considering one of his Flight of Time alarm clocks fetched only $1,600 in a recent auction.