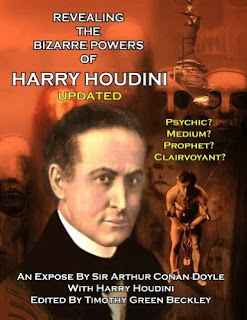 First released in 2010, Amazon is now listing a new edition of Revealing the Bizarre Powers of Harry Houdini

This is basically Houdini's 1924 book, A Magician Among The Spirits

, with reprints of several articles by Sir Arthur Conan Doyle included as a rebuttal. It also contains an essay on the Houdini-Doyle relationship by Timothy Beckley, and is illustrated with many photos and some rare newspaper clippings (a few that I've never seen).

While the cover says "Updated", it's unclear what, if anything, is new in this edition besides the cover art. The page count is the same as the 2010 edition (240 pages). Also, the 2010 edition included a bonus CD containing the recording of the Final Houdini Seance. This edition doesn't appear to have the CD.

If you didn't get this this first time, it's well worth having. Hopefully we can get some details on what might be new (or not) in this latest edition.