'From Houdini to Hugo' in Wisconsin 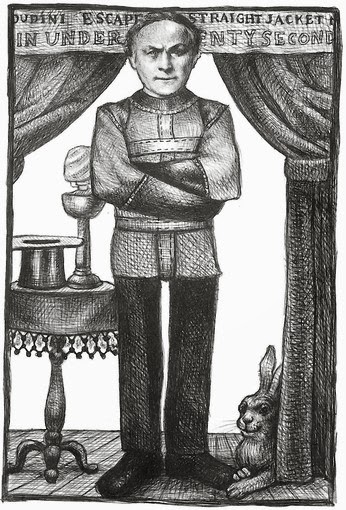 Two magic-themed exhibitions, From Houdini to Hugo: The Art of Brian Selznick and Mystery, Magic and Mayhem: Wonders from the American Museum of Magic are on display now through April 6 at the Leigh Yawkey Woodson Art Museum in Wausau, Wisconsin.

From Houdini to Hugo is comprised of more than 100 works by children's author and illustrator Brian Selznick, whose books and illustrations focus on such historical figures as Harry Houdini (The Houdini Box) and Georges Méliès (The Invention of Hugo Cabret).

"Growing up, Selznick was fascinated with filmmaking, monster movies and Houdini, so a lot of his book illustrations focus on those elements," said Amy Beck, marketing and communications manager with the Woodson Art Museum. "His illustrations have a way of bringing history to life for children and families."

Selznick's book The Houdini Box is currently being developed as a film by Chernin Entertainment and 20th Century Fox. In 2012 it was produced as a stage play by the Chicago Children's Theater.

The museum's complementary exhibition, Mystery, Magic and Mayhem, features lithographs from the late 19th century and early 20th century advertising magicians and their acts, as well as authentic props from the era. On show are posters for Blackstone, Carter, Houdini, Kellar, Chung Ling Soo and more.

"American audiences in that time were captivated by all these perplexing and over-the-top theatrical magic shows," Beck said. "By seeing the artwork used to publicize those events, you learn a lot about the era."

For more information visit the Woodson Art Museum website. You can also see photos of the displays on their Facebook page.

Source: Wausau Daily Herald.
Written by John Cox at 8:51 AM