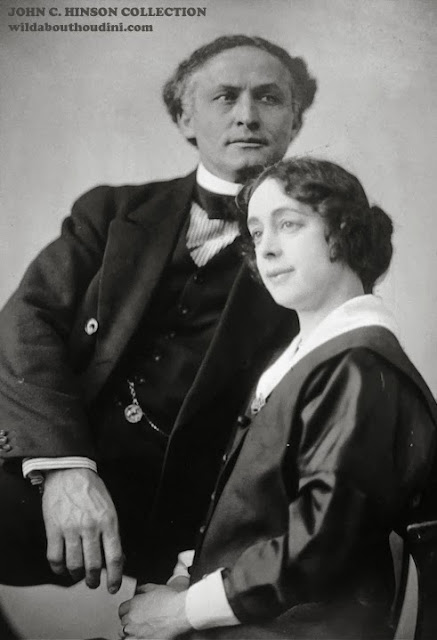 There are multiple versions of how Houdini and Bess met. Bess told her version in the book Houdini His Life Story (1928). According to Bess, Harry was performing at her school and accidentally spilled acid on her dress during a magic trick. He had his mother make her a new dress, and then took her on a date to Coney Island. But when he kept her out too late, Bess became panicky that she would get in trouble. Houdini then gallantly proposed. This version is now considered to be pure fiction, but it does make for a cute short film (below).


The second version was told by Houdini's brother, Hardeen, and first appeared in the 1959 biography Houdini The Man Who Walked Through Walls by William Lindsay Gresham. In Dash's version, Bess was working as a fellow performer in Coney Island with The Floral Sisters when he and Harry were performing as The Brothers Houdini. Dash dated Bess first; but then made the mistake of introducing her to his charismatic older brother. A quick courtship and proposal followed. This version is generally accepted to be the truth, and has evidence in the form of two newspaper articles from the 1894 Coney Island Clipper which mention Harry and "Bessie Raymond" (her stage name).

But now here's a third version, this one from Houdini himself! The Handcuff King related this in his own words to the The San Francisco Call on Sunday, Sept. 1, 1907, in a lengthy biographical article by Arthur L. Price. Under the subheading, "Willing Wilhelmina", Houdini says:

I eloped with my wife from her school books: that was 14 years ago, and she was then just 16 years old. I was only about 20 and was working in a little Brooklyn theater, which she used to pass every day coming from school. Her name was Wilhelmina Rahner and she came about No. 9 in a family of 14 girls.

I saw her passing the place one day and I said, "Hello."

I asked if I might take her home after school. "Yes; but don't let mother see you," replied the girl, smiling a bit.

She thought I was a real actor, a sort of Booth of Sir Henry Irving, and I didn't put her wise.

"How'd you like to be an actress?" I asked her one day, knowing that most girls were crazy about the stage.

"Would you marry me?" I asked quickly.

That was on Thursday; Saturday night she met me and we went over to New York City and were married in the city hall!


Like Bess' acid on the dress tale, this is almost certainly fiction. But it is a fun story and I love their banter. Now, why Harry felt compelled to make Bess only 16 is a mystery. Bess was actually 18 when they met and married. But the idea of a "child bride" was not unheard of at this time.

Of course, I've always been intrigued by what we might consider a fourth version that Bess told to Dorothy Young, possibly while under the influence of her favorite champagne. Bess confessed to Dorothy that she, "sold her virginity to Houdini for an orange."


Thanks to Tom Interval for finding and providing The San Francisco Call interview. Unpublished photo of Houdini and Bess made possible via our Hinson Endowment.