Herman Weiss or an Italian Job?

Recently this photo cycled unsold on eBay. It is said to be of Houdini's half-brother Herman who died when Houdini was still a boy. On the back is written "Herman M. Weiss, Appleton 1882." If legit, it would be only the second known photograph of Houdini's oldest sibling.


Below is the one known photograph of Herman Weiss. This was discovered by Ken Silverman in the Library of Congress and comes from Houdini's Strange Tales by Patrick Culliton. Herman might be a few years older or younger in the below photo. Is there a resemblance?


I was considering pulling the trigger on this -- the seller had a $79.00 Buy It Now -- until I remembered that back in May a cabinet photo appeared on eBay that was said to be Houdini's brother Nathan (this was also written on the back). That photo did not resemble Nathan and also went unsold. Now looking back, the man in that "Nathan" photo very much resembles the man in the photo of what is now said to be "Herman"!


The name of the seller of the Nathan pic (jerry_storia) is different from the Herman shot (ritamoio). However, both are from Italy with almost identical profile pages, and the layouts of the listings are strikingly similar. Also, while writing on the back is key to identifying both these photos, it both cases the seller doesn't include a photo of the writing in the listing.


So what's going on here? It would be very exciting to confirm that this is a photo of Herman Weiss. But the dubious "Nathan" pic and the similarities between these two sellers makes me a little suspicious.

Thanks to Adam Steinfeld for the alert.

UPDATE: The seller has provided me with an image of the back of the Herman photo showing the writing. Not handwriting I recognize. 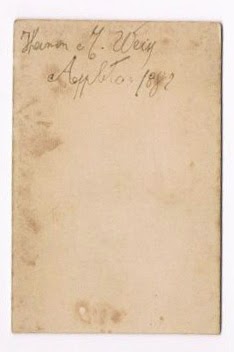