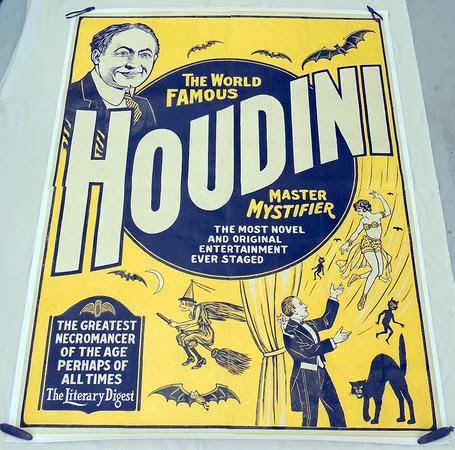 Last month I reported that a large selection of Houdini items from the private collection of former Philadelphia 76ers president Pat Croce will be auction by Briggs in Pennsylvania on February 21.

Now the auction house has put up the listings for the auction and…wow! Along with the handcuff displays cases that were highlighted in December are many more items that were not mentioned, including rare photos of Houdini, a significant Harry Kellar letter, and a 4-sheet poster from Houdini's full evening show (above).

By the way, I've always thought it was eerie that Houdini would use Halloween iconography on this, one of his last posters.


Click here to view the auction lots at Briggs.

Thanks to Leo Hevia for the alert.
Written by John Cox at 5:15 PM