The Wild Man is loose!

Hungarian actor Köleséri Sanyi has shared to my Houdini Miniseries Facebook page a photo of himself with actor Adrien Brody on the set of the upcoming biopic. He's captioned the pic: "Midnight teatime with Houdini." I'm guessing this is Brody in his "Wild Man" makeup. Sanyi himself appears to be in clown makeup. 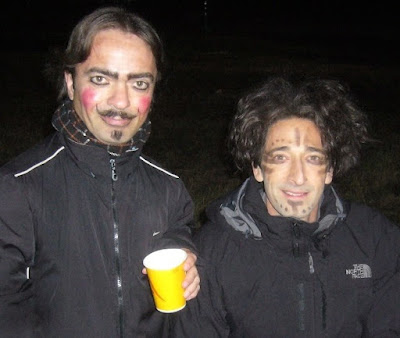 In his struggling days, Houdini doubled as "Projea, The Wild Man of Mexico" during his stint with the Welsh Bros. Circus. The Wild Man was memorably depicted in the Tony Curtis Houdini movie.

What I love here is Brody's makeup appears to be a far more accurate depiction of Houdini's real Wild Man. Houdini's preparation was described as messing up his busy hair and drawing lines on his face with coal soot. That seems to be what we see here.

Houdini stars Adrien Brody as Houdini and Kristen Connolly as Bess. The 4-hour miniseries is directed by Uli Edel from a script by Nicholas Meyer. It will air over the course of two nights on HISTORY later this year.