Here's another incredible Houdini artifact from Potter & Potter's auction of Houdiniana set for August 23. I think this has the potential of being a recorded setter because of its importance to Houdini history. I'll let the auction description speak for itself. 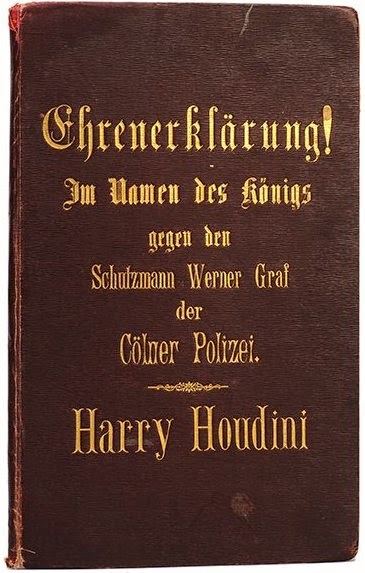 Lot 60: Houdini’s German Slander Trial Archive, known as “The Cologne Papers.” Being a file of documents from the famous 1902 German court case in which Houdini successfully sued Cologne Patrolman Werner Graff and newspaper editor Johann Merfeld for slander. Graff alleged Houdini was not the “genius of escape” he claimed to be. Merfeld published the allegations. Houdini was vindicated in a court of law, and the judgement was upheld on appeal. The most significant item in the archive is a folio containing a nearly 50-page-long handwritten transcript of the court proceedings, in German. This is bound in cloth with marbled endsheets, elaborately gilt stamped on the front board with old German text which roughly translates to “Public Apology! In the Name of the King against the policeman Werner Graf of the Cologne Police. Harry Houdini.”

No Houdini biographer to date has had access to this folio. Many passages have been boldly underlined or marked in pencil, presumably by Houdini, who habitually made notations of this sort, and who would use scenes from the trial in his own publications in following years. Also bound in is a handwritten notice in which the plaintiff is identified as “Weiss” as opposed to “Houdini”; and a short summation of the judgement, typed and signed on three legal-size sheets and signed by a German official. Tipped on to various blank leaves are scattered newspaper clippings in both German and English, and other official documents. Two typescripts contemporary to the trial, one in German, the other its English translation are also included. These reproduce the handwritten account and detail the proceedings, which included escapes by Houdini from locks and chains, as well as a demonstration of how to escape handcuffs. Three telegrams are part of the archive. The first, dated February 26, 1902, was sent to Hardeen by Houdini. The message is one word: “Victory.” Below this is Houdini’s typed note, “I cabled this to Dash from Cologne Germany, when I won my lawsuit. H.H. [Signed] Houdini.” The telegram has been laminated. 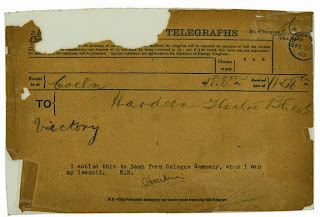 The second is a telegram of congratulations sent to Houdini by his friend James Bard. Houdini’s typed note on the telegram states, “Wire from Jim Bard and Schelessinge[r] when I won my law suite in Cologne. H.H.” The third, in German, bears Houdini’s typed note: “Wire received from Herr Dr. Althoff when I won my lawsuit... . HH. And this is written in 1914.” As biographers Kalush and Sloman explain, “Houdini’s sweetest revenge came when the court ordered a public apology from the Kaiser be issued to Houdini….” This, then, is the most personal and lasting relic of that sweet revenge, and an important historic artifact of one of Houdini’s first great publicity stunts; a unique and personal document from his early years and successes in Europe, as he rose to greater fame.
Estimate: $20,000 – $30,000
Starting Bid: $10,000
SOLD FOR $26,000


We had a ringside seat in the discovery of this important archive in 2012. Our good friend Kevin Connolly, who had been "trying to chase this down for 30 years," broke the news of its discovery in a series of posts at his blog Houdini Himself (now offline).

It's incredible to think that "no Houdini biographer to date has had access to this folio." (Although Ken Silverman in Houdini!!! The Career of Ehrich Weiss had some unique information of the trail.) What new information could we discover here? And am I crazy to think that this might bring the second highest price of any item in the auction (I expect the Double Fold box will be #1)? We'll see.