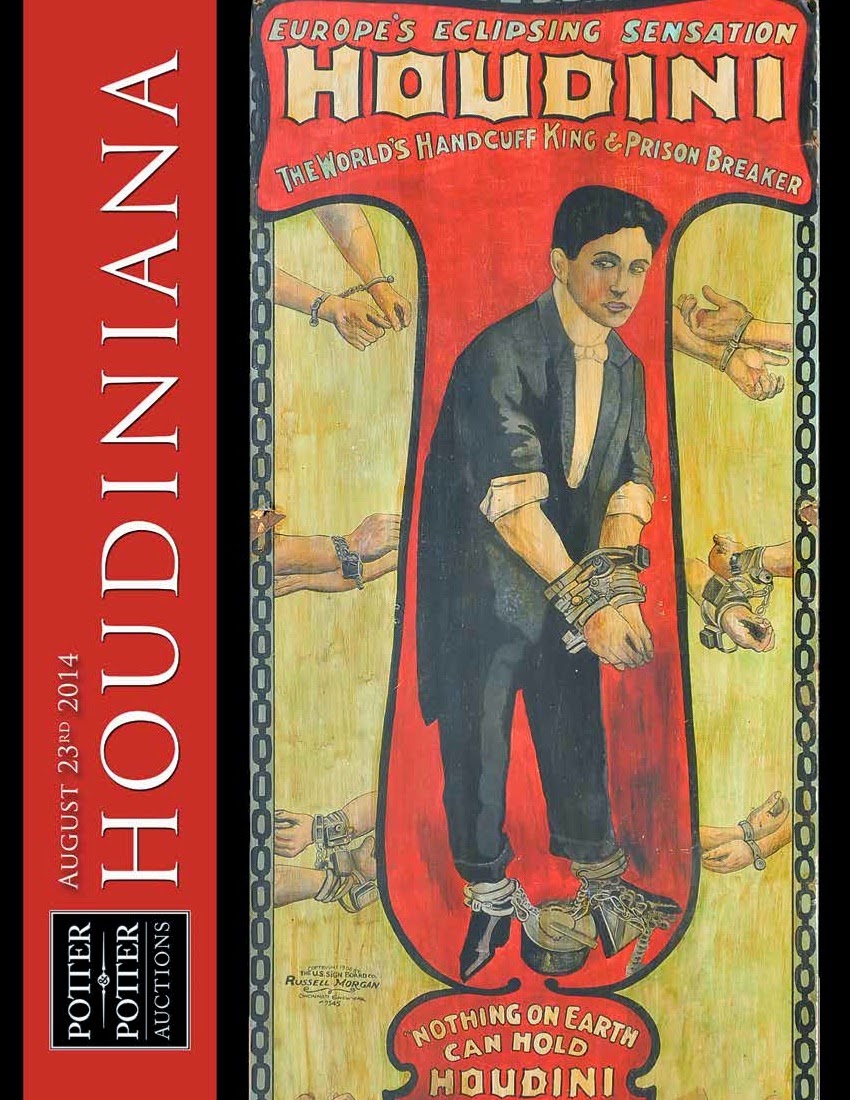 Potter & Potter's massive auction of Houdiniana has just concluded in Chicago, and it was every bit the mega event that it promised to be! Here's a quick rundown of a few choice items.

As expected, the Double Fold Death Defying Mystery box was the star of the show. The custom made chest beat its estimate of $20,000 - $25,000 to top out at $55,000 (before 23% buyers premium). I think that is a very good price for both the seller and buyer. And before anyone asks, I do not know if the buyer was David Copperfield, although I hope that it was. I think his International Museum and Library of the Conjuring Arts in Las Vegas would be the perfect home for this important Houdini artifact.

I'm thrilled to say the second highest selling item in the auction was the lost spiritualism scrapbook that WILD ABOUT HARRY had a major hand in helping uncover last year. The scrapbook blasted past its auction estimate of $15,000 - $20,000 and topped out at $36,000 (before premium). A very big congratulations to our friend Mike!

The Cologne Papers fell within their estimate and fetched a very respectable $26,000. Possibly what held it back from going even higher was the fact that the papers are mostly in German and the buyer will have to incur the expense of having these translated to discover what secrets they may hold. Let's hope that happens.

Houdini's sweat-stained punishment suit took in $11,000. I think that number could have been higher if we knew those stains belonged to Houdini and Hardeen instead if Sidney Radner, who used the suit extensively in his own performances as Render the Escape Artist (he also memorably escaped from it in the 1971 BBC documentary The Truth About Houdini). And speaking of Sid and Hardeen, the lot of 64 letters of their correspondence sold for $7,500.

The Houdini/Morritt plans for the Black and White illusion conjured $10,000. The unfurnished manuscript to Houdini's last book Witchcraft came in at $15,000. Houdini's heavily corrected revised manuscript for A Magician Among the Spirits grabbed $16,000.

What might have been the biggest surprise of the auction was a single combination padlock with an terrific letter of provenance from Hardeen that took away $16,000 (estimates was $7000 - $9000). Another surprise was a photo of Houdini leaping from a ferry that was estimated at $800 - $1000, but made a splash with $4,200.


Speaking of photos, the image of Houdini in Russia grabbed $1,400, and the candid pic from Bess's birthday party inside 278 fetched $4000.

Posters came in mixed. A 1905 German Art Nouveau poster found a buyer at $8,500, falling within its estimate of $8000 - $12,000 (but I thought it might do better). Buried Alive, which might be the only Houdini item in existence that seems to be decreasing in value, grabbed $8000 (estimate was $8000 - $12,000). But a King of Cards poster did unusually well at $17,000. Like Buried Alive, King of Cards has had trouble breaking above $10,000, but not today. It could be because this was the exact poster that magician Tommy Windsor used to create the first popular King of Cards reproduction in the 1950s.

The only pass in the auction (that I witnessed) was the large Europe's Eclipsing Sensation advertising board. Ironically, this is the item that graced the cover of the auction catalog. It had a whopping $25,000 - $35,000 estimate with a $15,000 opening bid; even higher than the Double Fold box!

Overall, the auction was beautifully managed by Potter & Potter. Estimates were accurate and realistic, and many items met or beat their high end estimates. There were both breakouts and deals. (I'm kicking myself for flinching and not getting a terrific handwritten Bessie letter that went for only $250.)

Congrats to all the buyers and sellers and to Gabe Fajuri at Potter & Potter Auctions. This will go down as one to remember!