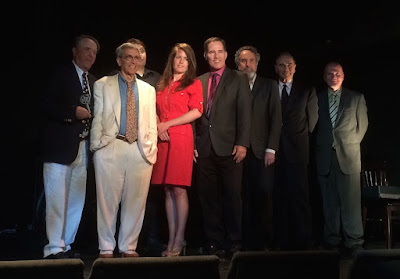 Last night the Houdini miniseries was honored with an award from the Independent Investigations Group (IIG), a skeptical research and science advocacy organization. The miniseries was recognized for its depiction of reason and science over superstition (via Houdini's spirit busting activities) in mainstream media.

Said Meyer, "I thank Gerry [Abrams] for the really wonderful opportunity he gave me and the great time we had putting this movie together. The icing the cake is this award which we were far from expecting, so thank you all very much." 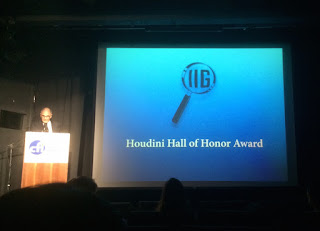 Each year the IIG also presents the "Houdini Hall of Honor Award" to an individual who has devoted their career to promoting scientific and critical thinking to the public. The year's winner was best-selling author (and one-time magician) Richard Wiseman. His name will join Houdini, Carl Sagan, James Randi, Isaac Asimov, and others on a plaque on display at the Center for Inquiry.

On a lighter note, the 2015 "Terrible Television Award" went to Dr. Oz, who addressed the audience from behind the screen with smoke and pyrotechnics like the great fake Wizard himself. The show also featured very funny performances by the talented Hannah Gansen and Jim Coughlin.

"The IIG Awards recognize mainstream entertainment for promoting critical thinking and scientific values and dispelling myths and superstition," said host James Underdown, Chair of the IIG. "This has become an important annual event at the intersection of science and entertainment."

For more information about the IIG, visit their official website. Stay tuned for exciting news of an upcoming IIG-Houdini event and a look at an amazing Houdini artifact at the CFI.