Venue change for Scranton screening of The Grim Game 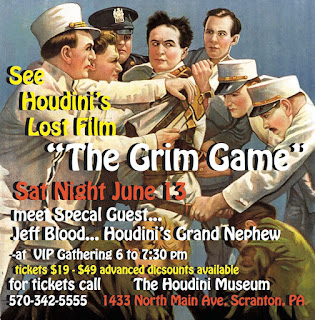 There has been a change of venue for the June 13th screening of Houdini's The Grim Game in Scranton. The film will now screen at The Houdini Museum instead of the Leonard Theater as previously announced. Members of the Houdini family, including his grand nephew, Jeff Blood, will be in attendance.

The event will include a VIP cocktail party reception with hors d’ourves and an open bar. Posters and memorabilia from The Grim Game and Houdini's performances in Scranton a century ago will be on display before and after the screening.