The Magic Castle bids goodbye to the Houdini aquarium 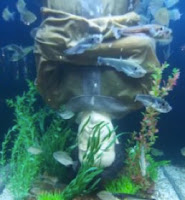 The Magic Castle has quietly retired their Houdini aquarium. The aquarium was made for the AMA as part of an episode of the reality show Tanked in 2012. It resembled Houdini's Water Torture Cell.

True be told, the aquarium was problematic from the start. When the exotic fish were not eating each other, they feasted on the Houdini mannequin. The straitjacket was also not waterproof and began to rapidly decay. Eventually, the mannequin was removed. There was talk of replacing it, but that never happened, and now the tank has pulled a similar, merciful vanishing act.

It was a fun idea, but even I could see the Houdini fish tank was a little tacky and didn't really fit with the Castle decor of vintage magic memorabilia. At the moment, the AMA is considering what to do with it. Member suggestions have ranged from taking it to the desert and blowing it up, to making it into a giant popcorn machine. (Okay, that last one wasn't a serious suggestion -- I don't think.)

Ironically, this Friday, Tanked will be running a "Best Of" show in which hosts Wayde King and Brett Raymer remember making the Magic Castle Houdini aquarium. Sounds like they need some reality.