Here's some Sunday reading for you. Larry Harnisch's excellent L.A. history and crime blog The Daily Mirror (which seems t have taken a shine to Houdini these days) has posted the full interview with Houdini from the October 1925 Haldeman-Julius Monthly. One thing I especially like is it gives a very detail description of what it was like to step inside 278. Here's a taste: 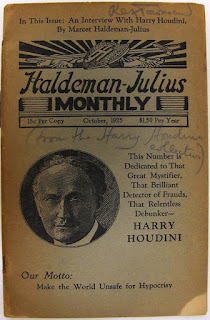 It was with a real thrill that punctually at eight o'clock on a soft midsummer evening––the fourth of August to be exact––E.  H.-J. and I drew up before 278 West 113th Street––the brown stone house which, near Eight avenue, is Houdini's New York home. The door was opened by a demure little woman who asked us if we had an appointment. Upon being assured that we had, she ushered us, in business-like fashion, into a long room rather too full of furniture, books, and bric-a-brac and lit by a single very beautiful antique, nail-pounded Egyptian lamp in which, without destroying the illusion, the soft glow of electricity had been substituted for the flames of candles.

In spite of the chandelier the room seemed quite dark, also a bit stuffy, but the little lady––a secretary I surmised her to be––in leisurely fashion, raised shade and window, letting in with one rush of flood of early twilight, abundant fresh air, and the noisy shouts of the many children who surged at play on the street. The racket had an incongruous sound in that hushed, orderly, not to say stiff, museum-like room.


The piece also give a nice description of Houdini himself:

He is, truth to tell, an enchanting person. Yet I find it difficult to translate his charm and dynamic or rather magnetic vitality into words. There is a rare delightfulness in his personality which is far easier to feel than to define. In his makeup there is a dash of Puck and it would not be in the least difficult to believe that he had been brought up by the elves or trolls. Yet nothing could be more clear-cut that the workings of Houdini's versatile mind.


Read the entire 10-page interview at The Daily Mirror.