Houdini vs. the Pottawatomie Giant

Boxing has been given its worst black eye here to-day by none other than Jess Willard, heavy-weight champion who was so badly worsted to a wordy clash with Harry Houdini, a performer at the Orpheum Theater, last night, that the audience hissed him from the house. 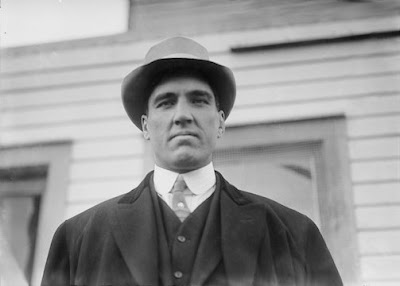 It was 100 years ago this week that Houdini had his famous encounter with heavyweight champion Jess Willard at the Los Angeles Orpheum Theater. But this battle was not with fists or even handcuffs. It was an unscripted verbal joust that, in today's parlance, went viral.

Houdini had just begun a two week engagement at the Los Angeles Orpheum (which still exists today). On the night of November 29*, 1915, Jess Willard was in the audience. Standing 6' 7" and weighing 256 pounds, Willard was known as the Pottawatomie Giant. He had knocked out heavyweight champ Jack Johnson in the 26th round of a bout in Havana to win the title in April of that year.

During his performance, Houdini called for a volunteer committee to step on-stage during an escape (the Water Torture Cell?). After several men volunteered, Houdini came to the footlights and said, "Now I need three more gentlemen on this stage and there is a man here to-night who doesn't know I'm aware of his presence. He will be enough for three ordinary gentlemen if he will serve on this committee. He is Jess Willard, our champion." The audience broke into applause. 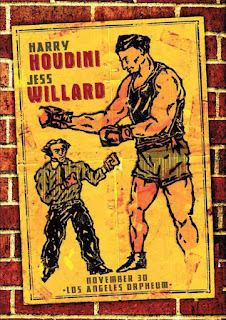 But Willard did not leave his seat. Instead he called out, "Awm g'wan with your act. I paid for my seats here." When Houdini tried to persuade him, Willard cut him off, barking: "Give me the same wages you pay those other fellows and I'll come down."

With the audience now uncomfortably quite, Houdini answered, "Sir, I will gladly do so. Come on down––I pay these men nothing." He then may have baited the boxer by adding, "Don't crawfish."

Willard got to his feet and roared, "Aw' g'wan with the show!" He then added insults which the Los Angeles Record reported sounded like "four-flusher" and "faker."

Willard's response jarred the audience from their silence. Some began to hiss. Houdini quieted them. By his own account, he was "white with rage." He then said to Willard:

"Look here, you. I don't care how big you are or who you are. I paid you a compliment when I asked you to be one of my committee. You have the right to refuse, but you have no right to slur my reputation... let me tell you one thing, and don't forget this, that I will be Harry Houdini when you are NOT the heavyweight champion of the world."


A great wave of applause erupted. Willard attempted a response, but was drowned out by "hoots and groans." Houdini delivered a final blow by turning to the audience and saying, "I made a mistake. I asked for GENTLEMEN to step on this stage and GENTLEMEN only."

The audience again roared their approval, during which Willard left the theater.

The incident at the Orpheum captured the imagination of the city. The front page of the Los Angeles Record was headlined: 2,000 HISS J. WILLARD. The story was picked up nationally, with the Washington Times reporting: CHAMPION WILLARD HOOTED BY CALIFORNIANS.

Three days later, on December 3, Willard tried to defend himself in an open letter to the Los Angeles Examiner, which he called "the one fair paper in Los Angeles." Refusing to acknowledge Houdini by name, he referred to his act as "moth-eaten" and stated:

When I declined to come down to the stage, this should have settled the matter and the stage "hero" should have gone about his work. The only reason in the world he "worked up a scene" was because he knew my name would be a boost for him.


The newspapers continued to hound Willard who eventually left town ("Driven out" the papers reported). Houdini gleefully wrote to his sister, Gladys, that he was now greeted in the streets with, "Hello Champion" and "How is the Champion today?" Even a local business got into the act by taking out an advertisement playing on the encounter: 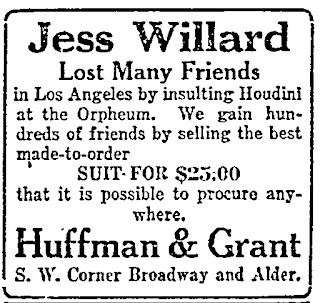 In Houdini!!! The Career of Ehrich Weiss, biographer Kenneth Silverman offers up a different perspective on Willard's actions that night. He speculates:

Willard's grumbling may have been nothing more than a cover for stage fright. Although he had once killed another fighter, Bull Young, in the ring, he was known to have a peaceable disposition and to be embarrassed by his awesome size. Some even thought he lacked fighting spirit.


But Houdini expert Patrick Culliton (Houdini's Ghost) speculates that Willard's words might have been more offensive than "four-flusher." Patrick thinks he might have hurled an anti-Semitic slur across the theater. In interviews, Willard expressed views consistent with white supremacy. This might help explain the intensity of the reaction against Willard.

Willard promised to turn the matter over to his attorney, Earl Rogers, saying, "I do not believe the laws of California permit of a theatrical management signaling out a patron for the abuse that I have had to stand." But there appears to have been no legal action taken. Houdini himself delighted in the avalanche of free publicity. "I have received at least a million dollars advertising space from this fray," he told his sister. 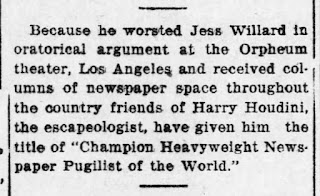 Jess Willard lost the heavyweight title to Jack Dempsey in 1919 in one of the most severe beatings ever in a championship bout. In 1923, at age 41, he made a surprise comeback by defeating Floyd Johnson at the newly opened Yankee Stadium. After being knocked out by Luis Ángel Firpo that same year, he retired.

The poster image of Harry Houdini vs. Jess Willard is from the back of the book, The Pottawatomie Giant and Other Stories by Andy Duncan. The Huffman & Grant ad comes from Carnegie: Magic Detective.

* UPDATE: Many sources identify the date of this encounter as November 30, but I have found compelling evidence to support November 29 as the true date.