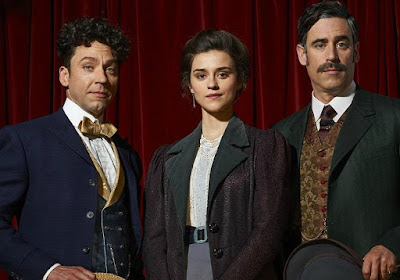 SpoilerTV have revealed the titles and plots for all 10-episodes of Houdini & Doyle. The series premieres on ITV and ITV Encore in the UK on March 13. It will air on FOX in the U.S. and Global TV in Canada starting May 2.

Don't read on if you don't want to know, but I think these sound pretty exciting!

Episode 1: The Maggie’s Redress
Houdini, Doyle and Adelaide investigate the murder of a nun in one of the notorious Magdalene Laundries. A witness claims the killer is a young woman who was tormented by the nun. The only problem is, that young woman has been dead for six months.

Episode 2: A Dish of Adharma
A 12 year old boy shoots a prominent suffragette, claiming he’s avenging a murder - his own murder in a past life. And if the trio wants to find the truth, they must solve the decades-old killing.

Episode 3: In Manus Dei
When a heckler is mysteriously struck down at a faith healer’s show, the team investigates whether the healer is truly channeling the power of God. And if so, can he work a miracle on Doyle’s dying wife?

Episode 4: Spring-Heel’d Jack
In the first of several attacks, a businessman is murdered by a mysterious phantom with demonic eyes and gravity-defying leaps. As panic spreads across London, the trio tries to determine if this is a case of mass hysteria, or is there a beast out there that thrives on fear?

Episode 5: The Curse of Korzha
An attractive traveling medium uses her psychic gifts to solve crimes, frustrating Houdini when he can’t figure out her tricks. Doyle feels she may be the real thing, so he is mortified by her next prediction: the end of Adelaide Stratton.

Episode 6: The Monsters of Nethermoor
After a nightmarish encounter with otherworldly beings, a man wakes up in a field claiming his wife has been abducted by aliens. The team investigates but it’s only when Doyle has his own encounter that they learn the horrifying truth of what’s really out there.

Episode 7: Bedlam
When several people are found literally scared to death, the clues lead the team to Bedlam, the notorious insane asylum, with which Doyle has a disturbing history. And when he starts to lose his grip on reality, he doesn’t know if he’s losing his mind or is becoming the next victim.

Episode 8: Strigoi
Bram Stoker, author of Dracula and good friend of Doyle’s, shows up at Doyle’s house in a panic. Vampire hunters are trying to kill him, believing Stoker to be a vampire. As they investigate a disturbing murder, they begin to wonder if Stoker really is a vampire, and if not, what is the dark secret he’s desperately trying to hide from the world?

Episode 9: Necromanteion
The trio travels to Canada to investigate a homicidal poltergeist, where they are joined by other paranormal experts, including Thomas Edison, who unveils his latest invention - the Necrophone - a device that can purportedly communicate with the dead.

Episode 10: The Pall of LaPier
Small-town Ontario. A minister wakes to find everyone in his village dead, without the slightest sign of violence. Was this retribution for past acts of evil, as the local natives believe? And if not, how else to explain why the man of God was the only one spared?


You can keep up with all episode details and latest news on my dedicated Houdini & Doyle - Episode Guide.

ITV has also posted an extended preview clip from "The Maggie's Redress" HERE. Unfortunately, it is only viewable in the UK. But they've also released a new trailer viewable to all (below):