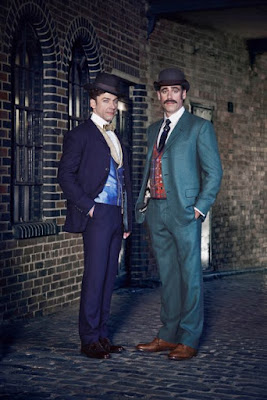 The premiere episode of Houdini & Doyle, "The Maggie's Redress" reveals the series to be fast and breezy with terrific production values and fine performances. While Doyle purists might not forgive Stephen Mangan for abandoning the author's Scottish burr, I think Houdini fans will be very happy with Michael Weston. In fact, in some regards, Weston is giving us one of the more accurate depictions of Houdini during his early Handcuff King days. But I will get to that.

The episode kicks off with action showing Houdini and Doyle trapped in a cellar filling with water. Here we get a taste of their relationship via snappy dialogue, with Harry boasting he can hold his breath longer than anyone alive, and Doyle telling him that won't matter, he will still drown. Harry's retort: "I'm not saying I'm going to live. I'm just saying I'm going to outlive you."

This nicely establishes their competitiveness, which was an unspoken aspect between the real Houdini and Doyle. So right off the bat the series sets up their relationship in a way that is both accurate and funny. And the death trap device reminded me of watching Houdini's The Master Mystery so... I'm in! 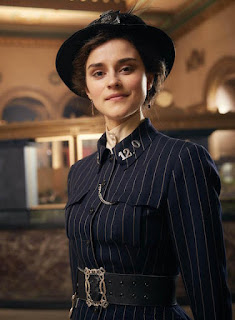 We then jump "3 Days Earlier" and find Houdini and Doyle independently angling to investigate the murder of a nun in a Magdalene Laundry. The only eyewitness claims she was killed by a ghost. Doyle is there because this could prove the existence of spirits. Houdini is there to debunk the nonsense being peddled in the papers. Chief Inspector Horace Merring, played by Tim McInnerny (who also appeared in the Houdini and Doyle movie, FairyTale: A True Story), assigns freshly minted Constable Adelaide Stratton the thankless task of looking after the feuding celebrities during their investigation. Stratton is played by Rebecca Liddiard and she darn near steals the show. She's not only a very good actress, but her character is the only one of the trio that has something at stake that isn't all about ego. Her inclusion was inspired, and in some ways this is her series.

Michael Weston is very well cast as the young Houdini. His playful high energy and American brashness might be closer to the real Houdini's character than we've ever had before (although I have no idea where they conjured up that hairstyle). His tendency to back his claims with a cash bet is very Houdini, and something that hasn't really been exploited before. Weston's Harry has the famous ego, but it's not an objectionable ego. It's more a youthful expression of extreme confidence in his abilities, which are undeniably miraculous. But there's a point in which Houdini is not asked for his autograph, and Weston's reaction is perfect. However, showing Houdini loading up what appears to be an opium pipe is a bit of a shocker. I'm curious to see where this goes.

Stephen Mangan does a good job as Conan Doyle, and while he is the bigger name actor (at least in the UK), he has the less glamorous role. Houdini and Stratton are both youthful 20th century progressives, while Doyle is still rooted in Edwardian ways and weighed down with superstition; although he thinks he's the progressive. The series is set during a period of time when Doyle had retired from writing Holmes after killing him off in "The Final Problem." It will be interesting to see if the series motivates Holmes' resurrection. 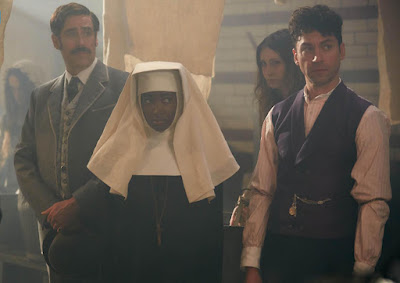 Like I said, the action plays out fast and furious (maybe a little too fast for my taste), and the core mystery of the murdering ghost is okay, not great. Still, it's an easy 45 minutes to sit through, and for Houdini buffs there is a lot to enjoy, including a recreation of the Water Torture Cell with an accurate looking cell and a conclusion that shows Houdini escaping and not "magically" reappearing as one of his own axe-wielding assistants. Moments like this actually make Houdini & Doyle more historically accurate (and respectful) than the recent Houdini miniseries.

The music has come in for some criticism for being too contemporary, but I thought it worked well. The criticism that some of the dialogue is anachronistic is warranted. The final scene in which Houdini hears the sound of ghostly piano playing is very nice, suggesting that the great skeptic might himself be haunted. By what or whom? We'll just have to wait and see.

Houdini & Doyle is upfront about being fictional. But as with most Houdini fiction, it still inserts some factual elements. So it's worth putting this episode under the microscope and seeing what truths lie within the fiction. It's not fair to call this a "fact check." Let's call it "fact sleuthing."

First off, Houdini and Sir Arthur Conan Doyle did indeed know each other in real life. However, they met later than what's depicted in the series. The series is set in 1901 (not stated in this first episode) during Houdini's first European tour. In reality, Houdini and Doyle met during Houdini's last tour of the UK in 1920. The real Houdini and Doyle did not investigate supernatural crimes, instead they shared an interest in spiritualism. It is true that Doyle was a great believer and Houdini was a skeptic. It's also true that Houdini was investigating spiritualism this early in his life and career, although he had not yet become the hardened skeptic and crusader. 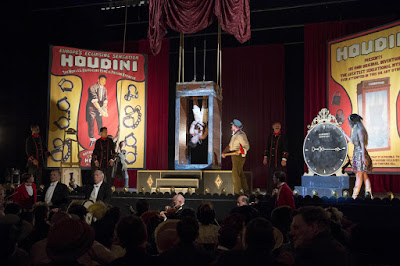 The series shows Houdini doing his famous Water Torture Cell escape. As discussed, it's a pretty accurate depiction. The posters we see are based on real Houdini posters (although they would not be onstage like this), and while it's a little strange that the audience applauds each passing minute, the panic they later demonstrate is something that is said to have gone on during Houdini's performances.

But the Water Torture Cell, as well as Houdini's identity as a "death-defyer", was still several years away. At this time, Houdini was known as "The Handcuff King" and was primarily doing handcuff and jail escapes, as well as magic such as Metamorphosis. Harry's attractive and put upon assistant Florrie (Jerry-Jean Pears) is pure fiction. Houdini's wife Bess was still working as his stage assistant at this time. But it appears Houdini is a bachelor in this series.

The hostility between Houdini and Chief Inspector Merring comes amusingly from Houdini having broken out of one of Merring's jail cells. This is somewhat rooted in fact. While Houdini never did a jail break from Scotland Yard, legend has it that a handcuff escape at the famous police headquarters launched his career in England. (But even that is open for debate.) There's also a suggestion that Houdini has a special relationship with the head of Scotland Yard, here called Sir Nicolas Hampsted. This mirrors the relationship the real Houdini had with Superintendent Sir William Melville. A hint that Houdini's "spywork" might show up later in the series? (Hope not.) 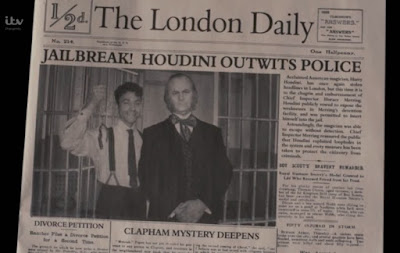 The inclusion of Houdini's mother (Diana Quick) was a nice surprise. Houdini's "royal" reception for her is rooted in reality as Houdini gave his mother a similar reception in Budapest with relatives. The idea that Houdini might have known W. B. Yeats, Winston Churchill, and Nikola Tesla is a bit of fantasy. A least there is no record of the men ever having met.

The series shows Houdini living at the Metropole Hotel in London. The real Houdini and Bess stayed at a boarding house favored by magicians at 11-12 Keppel Street. Houdini later bought an apartment in Bloomsbury. At one point, Weston's Houdini says he drives an Oldsmobile. The real Houdini drove a British made Humber at this time.

Finally, there's one real missed opportunity (IMO). In the scene in which Houdini opens the Magdalene Laundry's strong box, he picks the lock, which we see him do a lot in this episode. But in The Grim Game, the real Houdini opens the exact same type of strong box by "bumping" the lock. Wouldn't it have been wonderful to have Weston's Houdini do what the real Harry did in The Grim Game? This would have not only been a treat for Houdini buffs, but it would have provided the audience with a wider variety of lock-opening methods. 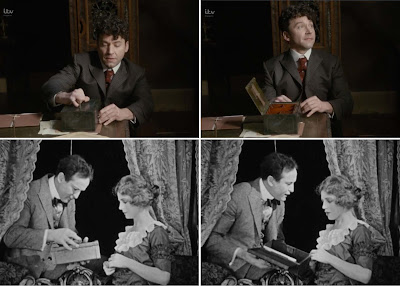 Based on this first episode, Houdini & Doyle looks very promising. It's not quite the quality of SHERLOCK, and I'm not sure it's even The X-Files yet, but it's well made and great fun and in Michael Weston we have a Houdini as appealing as Tony Curtis. I can't wait for the rest of the series.

I will review and "fact sleuth" the remainder of the episodes as they air in the U.S. on FOX starting May 2.


FOR MORE REVIEWS VISIT MY HOUDINI & DOYLE EPISODE GUIDE
Written by John Cox at 8:43 AM