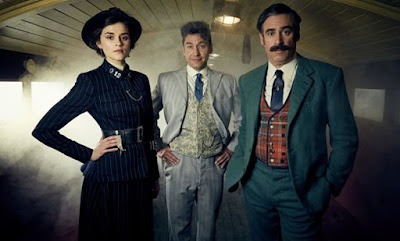 It looks like the UK will be getting Houdini & Doyle much earlier than the rest of the world. In an article today about actor Stephan Mangan's "Magnum-style" moustash (as in Tom Selleck's Magnum P.I.), Radio Times has finally revealed exactly when the new series will air:

Houdini & Doyle will premiere on ITV and ITV Encore at the same time on March 13th at 10:15pm. The series will then continue on ITV Encore from March 17th at 9:00pm each week.


The article also reveals that the actors have signed a "five year option" on the series. So if it's a hit, expect to see more Houdini and Doyle (and the moustash) in the future.

Houdini & Doyle stars Michael Weston as Houdini, Stephen Mangan as Sir Arthur Conan Doyle, and Rebecca Liddiard as Constable Adelaide Stratton. The series will air on FOX in the U.S. and Global TV in Canada starting May 2.