"A story that never has been told." 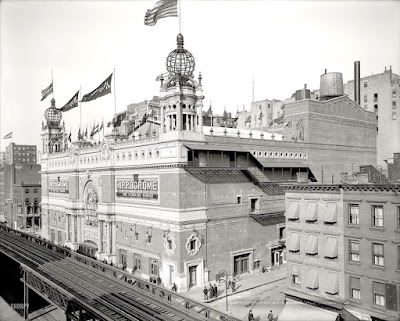 While I was at the Official Houdini Seance in San Francisco last Halloween, fellow speaker and inner circle member Jamy Ian Swiss shared with me a remarkable document from his collection. The story of how the document came to be is almost as interesting as the story it tells. Here's Jamy: 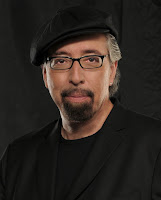 "Many years ago I bought my copy of the Kellock book [Houdini His Life Story] from Jackie Flosso, Al Flosso's son, when Jackie was still running the shop [Martinka]. This copy was owned by Sam Horowitz, aka Mohammed Bey, and is signed boldly on the frontispiece by him, "S. Leo Horowitz."

Jackie deliberately drew my attention to the volume because of the fact that the two pages of lined, hand-written notes telling the story were folded in half and pressed within the book. He knew the contents and delightedly told me the story contained therein, and the fact that we did not know who wrote them. It is not Horowitz's handwriting, so likely a friend of either Horowitz's or, for that matter, of Al's."


The two hand-written pages tipped into the book were headlined: "A story that never has been told." They referred to page 259, which covers Houdini's vanishing elephant illusion at the New York Hippodrome in 1918. Here is the full text:

A story that never has been told.

No mention here of the trouble Houdini had to get the elephant into the theatre. The Hippodrome stage level was about 4 / 4 1/2 ft above the street level. All stage scenery was brought through large doors on the 40th ? St. entrance. Planks were inclined from the sidewalk to the large entrance to the stage.

The elephant was led to the inclined planks. He took about 3 steps up when the plank broke. New planks were secured, but the elephant refused to walk up. They tried everything but he would not go up. (An elephant never forgets.) Houdini called Ducrot to ask him to get Si Perkins who was an "elephant man" (an elephant handler) - he also could do magic. He asked Ducrot to get him and send him to the Hippo. It happened that Si Perkins was there in Ducrot's shop as was I. Ducrot closed the shop and he and Si Perkins went to the Hippo. I could not make it.

The next day I learned from Ducrot how Si Perkins got the elephant into the theatre. There was no use trying to get the elephant through the regular stage entrance.

On the other end of the same side of the building a large hole was knocked out. The planks were ran up here and the elephant walked up. One of Houdini's tricks was to walk through a brick wall.

Now if he could only have done that with an elephant that really would have been something. 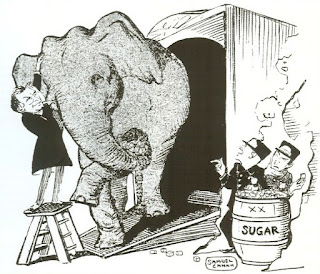 "Ducrot" refers to magician Frank Ducrot, who at this time was the owner and operator of the famous Martinka & Co. magic shop in New York City (Houdini bought a partial interest in Martinka's in 1919). As to Si Perkins, the "elephant man", I could not find anything conclusive, but I'm wondering if he could be the same Si Perkins who in the 1930s worked as the reptile curator at the San Diego Zoo in California (pictured below). 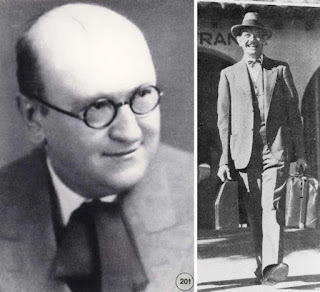 But the real mystery remains, who wrote these pages? Below is the first page. Perhaps a magic collector out there will recognize this handwriting and help identify our mystery author. 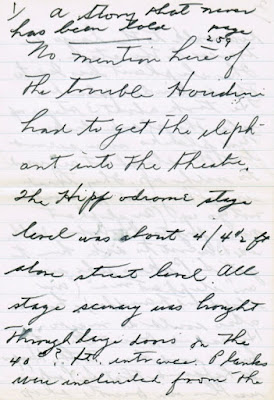 A very big thanks to Jamy Ian Swiss for allowing me to share his document here. It's a fun story and indeed a story that never has been told...until now.