The second episode of Houdini & Doyle airs tonight in the UK on ITV Encore at 9:00 PM. Here a pic and plot summery of tonight's episode: A Dish of Adharma. 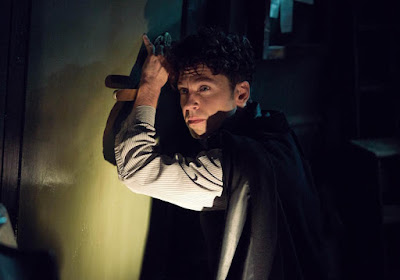 A 12 year old boy shoots a prominent suffragette, claiming he’s avenging a murder - his own murder in a past life. And if the trio wants to find the truth, they must solve the decades-old killing.


"A Dish of Adharma" is written by David Hoselton and directed by Stephen Hopkins.

Many in the UK are upset that the first episode of Houdini & Doyle aired free on ITV but the rest of the series will now only air on the SKY subscription channel ITV Encore. I can't say I blame them. Happily, the entire series will be released to DVD in the UK on May 23.

This weekend I will post my full review of episode 1, "The Maggie's Redress." Thanks to everyone who took part in my poll (results below). I will only be posting a review of this first episode. I'll review subsequent episodes after they air on FOX starting May 2.