Houdini the Great and toothless?

It was one year ago last night that Houdini's The Grim Game screened at Hollywood's Egyptian Theater after having been effectively "lost" for some 70 years. What a wonderful night it was! Over the course of the past year, we have had the chance to dissect every aspect of what we now know to be Houdini's best film, from the restoration process to reviews to location hunting. But here's something I spotted on that very first viewing that I've never been able to shake. Did The Grim Game show us that Houdini had a missing tooth? 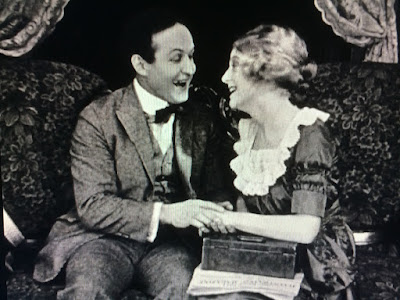 This scene occurs early in the film when Harvey Hanford (Houdini) comes to visit Mary Cameron (Ann Forrest). As you can see in the above screen grab, it looks as if something is missing!

So what do we know about Houdini's teeth? Well, we know a little, and it's not great. When Houdini was given a thorough physical examination in 1926 by Dr. Aleš Hrdlička, curator of Physical Anthropology at the Smithsonian Institution, the doctor noted the following in regards to Houdini's teeth:

According to Patrick Culliton, Houdini actually had a bridge, which might have been used to his advantage in concealing lockpicks and also performing the Needles. I've heard the bridge idea connected to when Houdini broke some teeth as a child when he attempted to duplicate the circus feat of dangling from a rope by his teeth.

In no other movie or photo have I caught this possible missing tooth, so maybe what we see in The Grim Game is just a trick of the light. Here's a screen grab from The Master Mystery that gives us a good look at Houdini's teeth. We're not really seeing the angle, but his teeth look strong enough to bite through a straitjacket strap here. 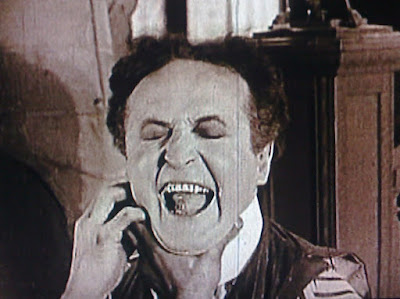 So what do we think? Was The Great Houdini toothless!? Let's chew on that one for a while.

UPDATE: Our friend Joe Notaro of HHCE offers up a publicity photo from this same scene. It appears there might be a discolored tooth here (1st bicuspid) that could have photographed black on film. Or maybe it's part of a bridge? Check it out.