Atlas Obscura, "the definitive guide to the world's wondrous and curious places", will host a special Houdini event in Washington, D.C. on April 16, 2016. "Obscura Day 2016: Houdini Escapes DC" will feature a lecture and rarities from the collection of Ken Trombly, a walking tour of Houdini's D.C., and a performance by Dean Carnegie. This takes place 100 years to the week that Houdini performed in Washington as part of his 1916 vaudeville tour. 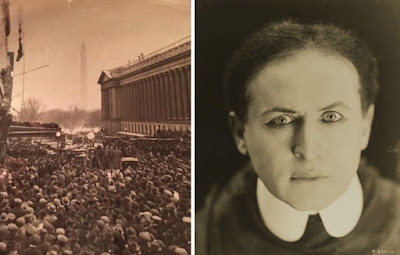 A frequent stop on his East Coast tours, Houdini always drew immense crowds when he performed in the nation's capitol.

It was said that he attracted over 15,000 witnesses along Pennsylvania Avenue in 1916 - at the time, more than any other event in DC's history aside from an inauguration - to see him attempt a death-defying escape while hanging upside down in a straitjacket. In 1926, he also came to DC to testify before Congress on the subject of spiritualism and the city's fortune-telling laws.

For this two hour event, we will delve into the treasured collection of Ken Trombly, attorney, magic enthusiast and Houdini collector. In an interactive presentation, Trombly will illuminate Houdini's rise, legendary performances, crusade against spiritualism, death and the rumors of his return from the great beyond.

We'll then walk to the former site of Houdini's suspended straitjacket escape outside B.F. Keith's Theater and then a quick stroll to Pershing Park, where a picnic of cherry pie (a Houdini favorite) and a magic show awaits us. Allow escapologist and historian Dean Carnegie to dazzle you by recreating Houdini's stunts: liberating himself from ropes, handcuffs (an authentic pair of Houdini-owned cuffs will be on display), amongst other devices. For his greatest trick he'll ask a volunteer or two from the crowd to participate... if you dare...


Tickets are $30 and can be purchased at the Obscura Day 2016 event website, which has all the details about what sounds like a terrific Houdini celebration!

Thanks to Julie Seigel.