"Houdini Talks" on his birthday 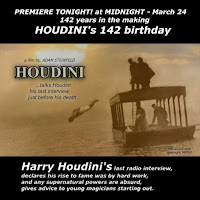 Magician and filmmaker Adam Steinfeld has released a new experimental Houdini short film, HOUDINI...talks Houdini. The first part of the film is a recreation of what a 1926 Houdini radio interview might have sounded like.

Says Adam, "Most Houdini feature films make an error of giving Houdini's voice a mid-west Americanized accent, and if you listen to early Edison recordings from 1914, you will clearly notice his thick Hungarian accent. So to be accurate, and to deviate from the norm of past filmmakers, I hired a voice artist direct from Hungary, Gergo Benedek, to give Houdini's real words a more authentic ethnic augmented reality characterization."

CLICK HERE and enjoy hearing from the Handcuff King on his birthday. You can read more about the film at the S.A.M. blog The Magic Compass.

UPDATE: Based in part on our feedback below, Adam brought in another voice actor to re-record the voice and has posted the new version HERE.