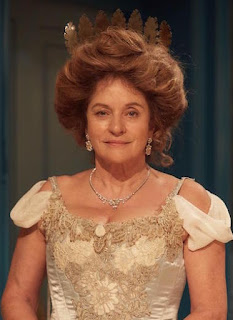 Here's some Houdini & Doyle casting news that has been keep under wraps until now. Houdini's mother, Cecelia Weiss, will appear in the series played by 69-year-old Diana Quick, a popular British stage and television actress best known for her role as Lady Julia Flyte in the series Brideshead Revisited.

But the series might be using Cecelia's character in a unique way. As I reported back in November, she may also appear as a young woman played by 29-year-old actress Bo Martyn. Whether this will be in flashbacks or maybe something more supernatural remains to be seen.

Houdini & Doyle episode one, "The Maggie’s Redress", airs this Sunday at 10:15 PM on ITV and ITV Encore in the UK. The series will air on FOX in the U.S. and Global TV in Canada starting May 2.