The April 2016 issue of MUM Magazine features a cover story about our good friend and living legend Dorothy Dietrich. The interview by Bruce Kalver is candid and fascinating, largely covering the highs and lows of Dorothy's upbringing and early years in New York City. It's a must read. 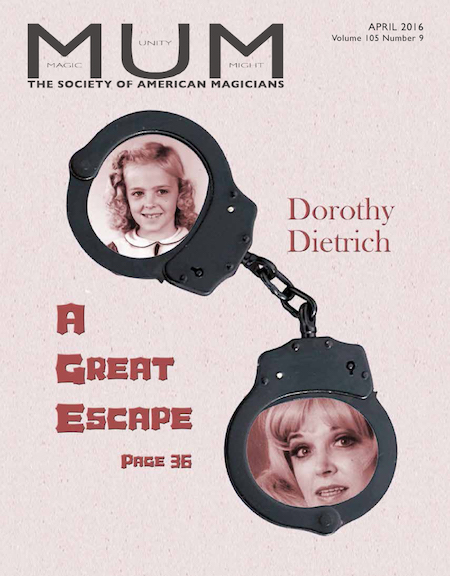 "After the show, an elderly gentleman was backstage and came over to me to say that he absolutely adored what I did. He went on to say that he had not seen anyone with the kind of command of the audience that I have. The last time he saw that was when he saw Houdini. I thought was this guy was pitching me or something. As he was walking away, someone asked me if I knew who that was. I said no. It was Walter Gibson."

SAM members can read the online version at the SAM website. There's also a bonus "Backstage" podcast that non-members can listen to HERE.

UPDATE: You can now read the entire interview at the Houdini Museum website.