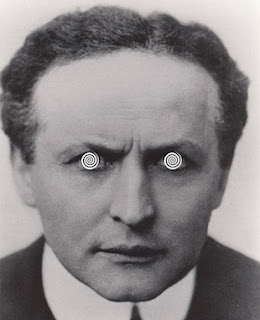 Here's an interesting article from the February 15, 1926 Reading Times about the state of magic, citing Houdini as a "the foremost example of the progress made in magic art." But one thing that jumps out here is the claim that: "hypnotism is a factor of great importance in Houdini's success as a magician."

This is the first time I've ever heard Houdini associated with hypnotism. But who knows? Maybe we are all subjects of some century old hypnotic spell? That would explain a few things! Or maybe this writer is just being hyperbolic. You decide.

Thanks to our friends Dorothy Dietrich and Dick Brookz of the Houdini Museum in Scranton for finding this one.
UPDATE: For a tale of Houdini as hypnotist go here: Paging Professor Murat.
Written by John Cox at 8:05 AM