A Houdini confederate confesses in 1975

Here's an interesting article from the April 22, 1975 Progress Bulletin about a man named Earle Codding who says he and a fellow solider were invited by "Houdini's manager" to offer up a pair of gaffed handcuffs during a performance in 1917. I especially like that Houdini "acted horrified about the military cuffs he was given." Way to make the most of the situation. 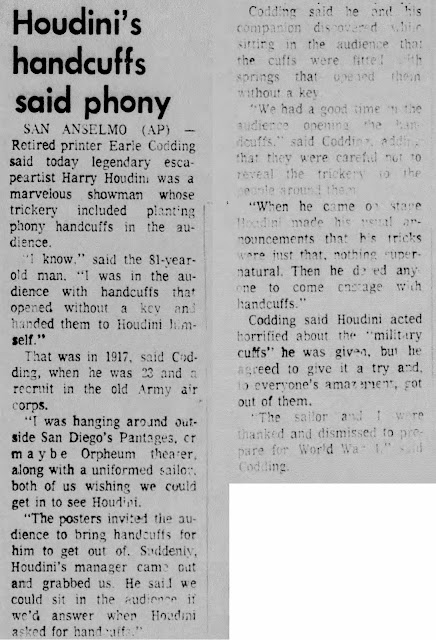 While it's certainly not beyond the realm of possibility that Houdini planted handcuffs in his audience from time to time (you couldn't count on people showing up with handcuffs at every performance), there are aspects to this recollection that are problematic.

The first is that Houdini was nowhere near San Diego in 1917. As far as I know, he only performed in that city once in 1907. It's also unlikely that Houdini would be doing challenge handcuff escapes this late in his career. He had abandon the handcuff act nearly a decade earlier and was now featuring the Water Torture Cell and challenge escapes. While it's not impossible that he would occasionally include a handcuff escape in the act, a poster advertising people to bring their own cuffs does not sound like Houdini at this time.

All this makes me wonder if these soldiers might have seen another escape artist. Vaudeville was rife with Houdini imitators and "Handcuff Kings," and some purposely blurred the lines in their advertising.

Interestingly, Hardeen was in San Fransisco and Los Angeles performing on the Pantages circuit in 1917. Did he go to San Diego as well? Note that the soldier says he's not sure whether he was outside the Pantages or Orpheum at the time.