Houdini appears in the new novel Pirate Utopia by Bruce Sterling. The official description on Amazon doesn't mention Houdini, so here's a review from Publisher Weekly that gives an idea of how Harry (and H.P. Lovecraft) fit into the story: 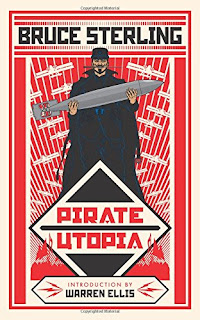 “Cyberpunk progenitor Sterling’s alternate history novella is bizarre, chock-full of famous people in improbable situations, and wildly entertaining, even when the world-building seems to go a little off the rails. Lorenzo Secondari, a veteran of the recently ended Great War and forever changed by it, is the head engineer of the titular utopia, the Italian free state of Fiume. He and his compatriots build flying boats and fight communism while dealing with American secret agents, including Harry Houdini and Howard Lovecraft (who’s now working as Houdini’s publicity agent after going into advertising). Hitler died saving another man’s life in a bar fight, Wilson was poisoned, and Mussolini’s been disabled by a pair of bullets aimed “where a man least likes to be shot,” so the Europe in which Secondari is attempting to create his radio-controlled airborne torpedoes and other gizmos is already massively different from ours. An introduction by Warren Ellis and an interview with Sterling sandwich the novel, both bearing an air of false gravitas, but the actual story is wacky and fun what-if-ing at its finest.” —Publishers Weekly


Pirate Utopia is released today and can be purchased on Amazon.com.
Written by John Cox at 7:26 AM