The Ehrich Weiss Bible is going to Budapest 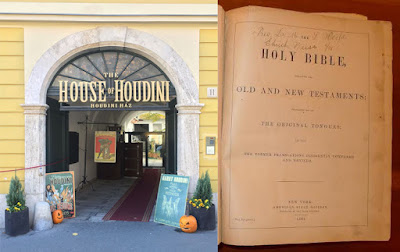 The recently unearthed "Ehrich Weiss Bible," which has been in the family of musician Tara O'Grady for some 38 years, will find a new home at David Merlini's House of Houdini museum in Budapest, Hungary. The Bible's arrival will be heralded with a major press event and concert on December 3. The following is from Tara's website:

On December 3rd Tara O'Grady returns to the city where she studied during her university days to present a rare signed bible from 1893 belonging to one of Hungary's most famous sons - Ehrich Weiss aka Harry Houdini. A press conference will take place at 11am at The House of Houdini. Irish Ambassador Pat Kelly will join Tara along with Museum Founder and Hungarian escape artist David Merlini, as well as the Hungarian Prime Minister’s cultural advisor Géza Szőcs.

Later that evening a reception and concert will be held at 8pm at Becketts hosted by the Irish Hungarian Business Circle. Tara will be joined by Hungarian jazz musicians including Attila Korb. It will be a magical day indeed!


Tara first shared images and the amazing story of how the Bible came to be in her family with WILD ABOUT HARRY in August. While there was interest from private collectors and auction houses, it's nice to know the Bible had landed somewhere where it can be enjoyed by the public and help tell the story of Houdini. David Merlini opened The House of Houdini, which is the first and only museum devoted to Houdini in Europe, in June.