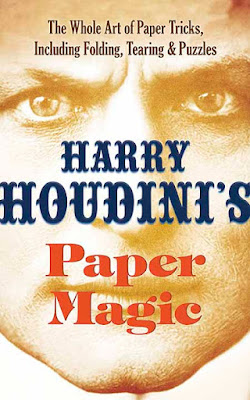 Next year Dover Publications will release a new edition of Houdini's 1922 book Houdini's Paper Magic. While this book had been reprinted many times, the fact that Dover is doing it is somewhat special. Dover has kept editions of Houdini on Magic and The Secrets of Houdini in print for several decades. In fact, Dover's Houdini on Magic was the very first Houdini book I ever bought. So we like them!

On the right is an early look at the cover art. As the book has not been printed yet, this might change, but I like what I see.

Click the links below for a look back the history of Dover's other two Houdini titles, still in print and going strong!