Houdini once again made an appearance on Derek Waters Drunk History, this time in a segment about the life of Buster Keaton. An inebriated Patrick Walsh told how Houdini named the young Keaton "Buster" after seeing him fall down a flight of stairs. Houdini appears again later when Buster needs to escape from a straitjacket. 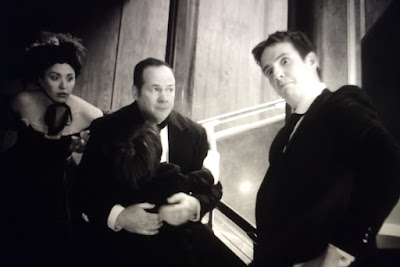 Houdini first appeared on the show in 2013 in a segment about his friendship with Sir Arthur Conan Doyle. Houdini was played by Ken Marino. I don't who portrayed Houdini in this latest appearance.

So how accurate is the history here? The story of Houdini naming Buster appears in many Houdini and Keaton biographies, although Keaton experts point out that Buster's father would sometimes tell this story with other famous figures in Houdini's place. The show suggests that Houdini was already an "internationally famous magician" at the time. But this would have happened in the 1890s when the Houdinis and the Keatons where still struggling. (It's said they worked together in the California Concert Co., a medicine show that Harry and Bess traveled with in late 1897.) The notion that Houdini taught Buster to escape from a straitjacket is something I've not heard before. 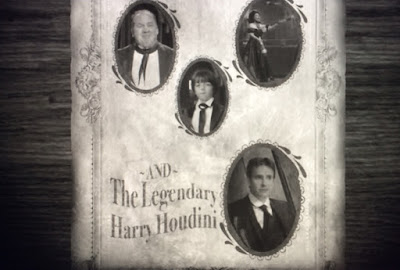 Drunk History airs on Comedy Central. You can also get it Amazon. The Keaton segment is in season 4, episode 2: "Legends." It first aired October 4, 2016. Season 4 also features a segment about the Fox sisters and spiritualism (episode 6: "Siblings.")

Thanks to Michael Curran for the alert.