The Boston Chapter of The Delta Bravo Urban Exploration Team -- "a collective of individuals that seek to find location detail for pop culture" -- have pinpointed the exact location of the famous photo taken of Houdini during his jump from the Harvard Bridge in Boston on April 30, 1908. I love "then and now" shots like this. 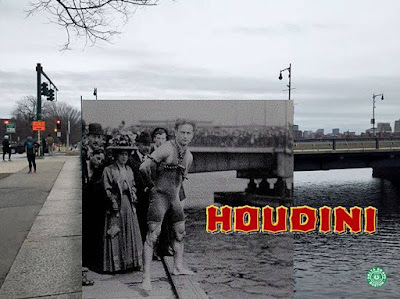 One thing this image immediately reveals is that the photo was not taken moments before Houdini made his leap into the river, as one might suppose. It was taken either before or after the stunt as Houdini (and Bess) are not even on the actual bridge from where the jump was made. No doubt having the bridge in the background made for a better photo op. This photo was likely taken by Arthur Kramer, whom Houdini later credited as the "official photographer" of the jump.

Below is a shot of Houdini's jump from the bridge itself.

Houdini was performing at Keith’s Theater on Washington Street at the time of this outdoor stunt. The Cambridge Chronicle (below) offered some nice details, including that Houdini wore a "cerise-colored bathing suit." This is second time I've heard of Houdini wearing a red(ish) bathing suit during a bridge jump. It makes sense. This would help Houdini stand out in the massive crowd, and help rescuers better spot him in the water should something go wrong. 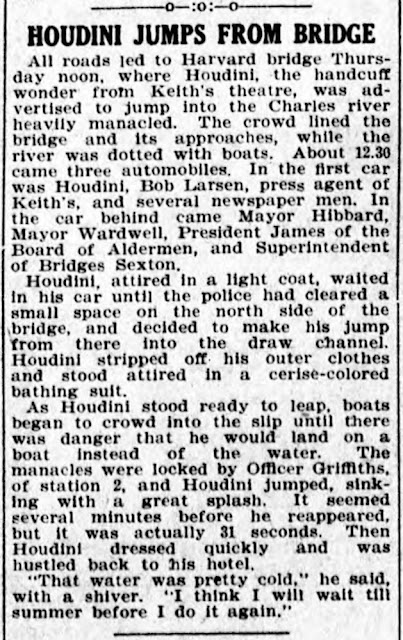 Houdini's leap from the Harvard Bridge is one of his more well-known bridge jumps, not only because of the excellent photos taken that day, but there is also a plaque commemorating the escape placed on the Boston side of the bridge by the Boston chapter of the Society of American Magicians in 1994. 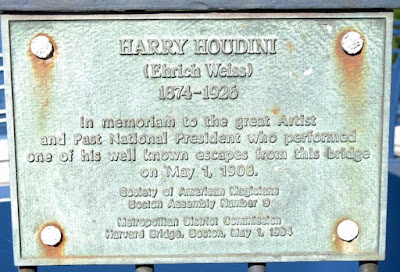 Unfortunately, this plaque incorrectly dates the escape as May 1, 1908. The escape actually took place on April 30. But at the time the plaque was made, Milbourne Christopher's Houdini The Untold Story was still the most authoritative biography on Houdini, at that book misdates it as May 1 (the date on which most papers reported the event). The first book I found to contain the correct date is 2010's Houdini Art and Magic by Brooke Rapaport.

Related posts:
Written by John Cox at 9:05 AM