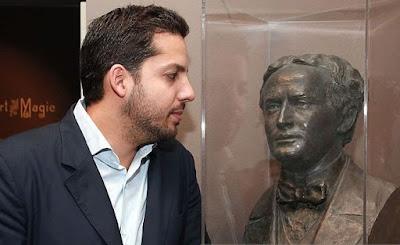 I really admire and enjoy David Blaine. In many ways, I do believe he is the modern Houdini. And those who have seen his live show say it's phenomenal. However, a recent article at Houston Culture Map suggests David might be trading on the old myth that Houdini died in his Water Torture Cell. Here's the surprising paragraphs:

Fans who know Blaine only from TV will see a different side of his work at the Smart Financial Centre — up close, front, back, and side. For his finale, he allows audience members to come onstage and examine a large, clear tomb of water before Blaine is lowered in and holds his breath for minutes that seem like hours. It’s the closer for Blaine’s show. It was his hero Houdini’s final act, too.

“Insurance companies won’t cover that part of the show. I push myself as far as I can, right to the breaking point, and that’s the end. Houdini died after doing this. He collapsed and was rushed to the hospital.”


So that's a bit of shocker to read. Certainly David Blaine knows the truth of Houdini's death. David is a great admirer of Houdini and credits the image of Houdini on a book cover as igniting his passion for magic. I'm also sure he knows Houdini didn't even do his Water Torture Cell during his final performance in Detroit, so there's no way to parse this into any kind of truth.

But David Blaine wouldn't be the only performer who couldn't resist the publicity appeal of this myth. In the 1970s, escape artists such as Steve Baker and Charlie Myrick openly advertised the Water Torture Cell as "the trick that killed Houdini." I believe even Doug Henning said this at some point. But this was back when the influence of the Tony Curtis movie--which created this myth--reached was far and wide, and people didn't have the immediate means to know any better. But nowadays a simple Google search will reveal the truth.

So even though you won't witness "the trick that killed Houdini", David Blaine Live is clearly a must see. Check out his official website for tour dates.