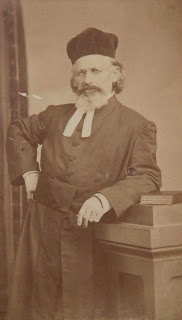 Tom Interval has update his blog Houdini Museum with a brilliantly researched and superbly written examination of Houdini father, Mayer Samuel Weiss. There's a lot of new information here, including an account of Mayer Samuel delivering sermons in Louisville, Kentucky in 1883 on "The human soul can never die" and "The characteristics of women as shown in Solomon's song entitled 'The Worth of the Woman'."

Tom also helps debunk the idea that Mayer Samuel was fired from his position in Appleton because he could not speak English, finding evidence that his replacement also couldn't speak English.

But you don't need to hear all this from me. Click the headline and have a read at Tom's own Houdini Museum.