'Man of Magic' to be released as limited edition CD

Here's one I never expected to see! Stage Door in the UK will release the original cast recording of the 1966 London stage musical Man of Magic as a limited edition CD on December 13, 2019. Below are details. 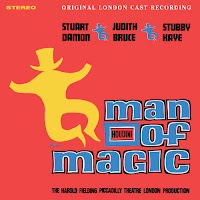 Continuing Stage Door's 'Cast Album Masters Series' is the CD debut of the 'Man Of Magic' Original London Cast Recording. Based on the life of iconic magician and escapologist Harry Houdini, 'Man Of Magic' opened at London's Piccadilly Theatre on November 15th 1966 and ran for 135 performance.

Featuring music by Wilfred Wylam (a pseudonym for classical composer Wilfred Josephs) and book and lyrics by John Morley and Aubrey Cash, the production starred Stuart Damon as Houdini alongside Judith Bruce as Bess and Stubby Kaye as Toby Kester. Produced by legendary theatre impresario Harold Fielding, the production received mixed reviews and failed to achieve the acclaim of his earlier successes 'Half A Sixpence' and 'Charlie Girl'. Despite the lukewarm critical response to 'Man Of Magic', the production was noted for its elaborate recreations of Houdini's illusions and the performances of its leading players Stuart Damon, Judith Bruce and Stubby Kaye.

Although 'Man Of Magic' marked Wilfred Josephs' only work for musical theatre, there is much to be enjoyed in his distinctive and immediate score, not least the rousing duet 'Conquer The World', 'Suddenly' and the comedy numbers 'Take Your Medicine' and 'Kester's Crystal Cabbage'.

The limited edition 500 unit only release of 'Man Of Magic' continues Stage Door's 'Cast Album Masters Series'. Licensing recordings from the major labels, the series presents the CD debut of many London Cast Recordings from the 1960s and 1970s, all digitally remastered from the studio master tapes.

You can hear song samples and pre-order at the Stage Door website. It's also available on Amazon.com and Amazon.co.uk.

Thanks to Michael Mitnick for the alert.