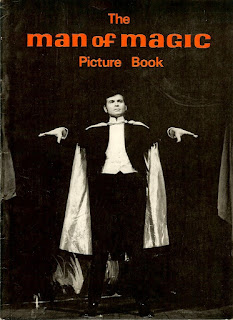 With the big news this week of a new Houdini Broadway musical with Hugh Jackman, I thought it would be fun to take a look back at the first big-budget Houdini stage musical, Man of Magic.

Man of Magic was produced by Harold Fielding and opened at London's Piccadilly Theater on November 16, 1966. The £75,000 production starred Stuart Damon as Houdini, Judith Bruce as Bess, and Stubby Kay as Houdini's fictional manager, Toby Kester. It was described as "a musical fantasy suggested by incidents in the life of Harry Houdini."

Magic and escape effects where devised by Timothy Dill-Russell, and included Metamorphosis, the Needles, a buzz saw, three floating woman at once (in a dance routine), and the Chinese Water Torture Cell with Dill-Russell doubling Damon (Houdini fails to escape, as required by the plot).

Reading back on the reviews, it's clear that the highlight of the show was Houdini's suspended straitjacket escape from the Brooklyn Bridge, which was staged using elaborate puppetry by Bill Baird and the Hogarth Puppets. Even Variety, in a generally tepid review of the play, praised the sequence for its "novelty and ingenuity." 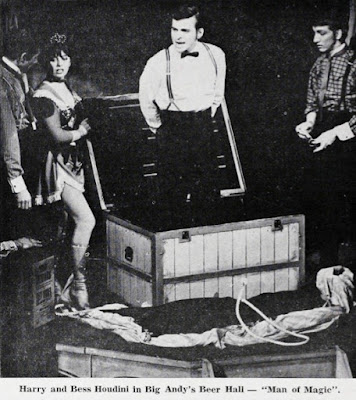 Book and lyrics for Man or Magic were by John Morley and Aubrey Cash, with music by Wilfred Wylam. The show included sixteen songs with names like; Floral Sisters, Man in the Crowd, Fantabulous, The Man Who Captures My Heart, Suddenly, Sling the Gin, Conquer the World, Take Your Medicine, Like No Other Man, Don't Bother Me Bub, The Earth is the Lord's, Keep a Good Man Down, Man of Magic, This He Knows, and Say Your Name.

Man of Magic closed after only 126 performances. Bill Larsen reported in Genii that there was "talk about it being made into an English movie", but this never happened.


Click here to enjoy 'The music of Man of Magic'.