Here's a little personal remembrance as we count down the hours to the premiere of HISTORY's Houdini miniseries tonight at 9pm.

For me, today is a nostalgic reminder of October 8, 1976. I was an 11-year-old prone to obsessions. I'd progressed from car hubcaps to old Jack in the Box wrappers (mom hated that one) to Universal Monsters, and I was now a little over a year into my latest obsession: HOUDINI. And, eerily, the world seemed to turn just for me. In 1976 Houdini seemed to be everywhere! Several new books had come out along with reprints of many older titles, and my father had recently taken me to a holy place called The Magic Castle (which he had joined as an associate member because it was a great place to bring business clients). Of course, magic itself was in a full-blown renaissance thanks to Doug Henning and his performance of Houdini's Water Torture Cell that past Christmas.

But October 8, 1976, was the culmination of all this, because ABC was about to air a brand new movie about the life of Houdini starring Starsky himself, Paul Michael Glaser. It's hard to imagine, but at that time, this was only the second Houdini biopic ever made, and the first since the Tony Curtis movie in 1953 (which, of course, had kicked off my Houdini obsession in the first place).

I can vividly remember being in the living room of our Canoga Park home with my cassette tape recorder ready to selectively record audio from the movie (this was well before video recorders). My brother tells me he watched it with me (his own obsession was and is Planet of the Apes), but I honestly can't remember anyone else in the room. Such was my total immersion. All I remember is sitting a few feet from our console TV set with my tape recorder between me and the screen as "The ABC Friday Night Movie" began promptly at 9pm.

From the opening credits, which showed black and white footage of Paul Michael Glaser recreating real Houdini stunts, I was mesmerized. And then we were in Machpelah Cemetery with Bess (never saw THAT in the Curtis movie!) and I knew this was going to be a new experience. Of course, The Great Houdinis is pretty adult, and as it progressed, I'm not sure I really understood the whole Mama vs Bess dynamic, and the Judaism vs. Catholicism thing certainly flew over my head. But none of that mattered. Because what I was seeing was Harry Houdini stepping back in front of millions of viewers, and I was in his audience that night!

Now, 38 years later (my God), here I am once again about to watch a new Houdini movie. Times have certainly changed. When The Great Houdinis aired, there were only three networks and about six channels total. Now, I don't even know how many channels I have on my cable system. We are also in the midst of huge change. Most of my friends will not be watching Houdini tonight as it airs with commercials on HISTORY, but will be downloading it on September 3 when it becomes available on digital platforms like Netflix and iTunes. No doubt this is how we will all be watching the next Houdini biopic.

But while the technology is very different, I'm still pretty much the same, and I've somehow been able to achieve my childhood dream of "spending my life writing and talking about Houdini." Of course, I now have a few (hundred) more Houdini books on my shelf, and I'm less forgiving about fictionalizations in what is billed to be a Houdini "biopic," but I'll save all that for my review. Because tonight, just like on October 8, 1976, I am thrilled to watch Houdini step back on stage before millions of viewers and, once again, I'm excited to be in his audience.

Lights going down. Curtain going up. It's time to meet the new Houdini... 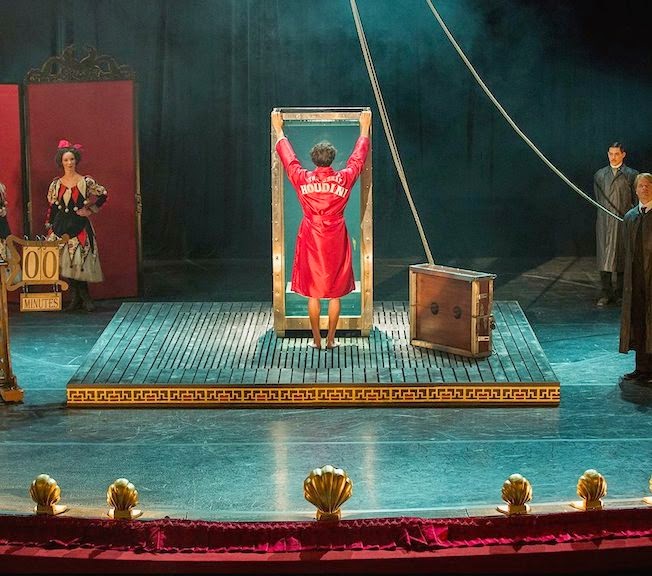