After the Houdini miniseries, I'm not sure there's much appetite for Houdini fiction at the moment. Nevertheless, I thought I'd share news of a new paperback edition of the 2001 book What Rough Beast by H.R. Knight. 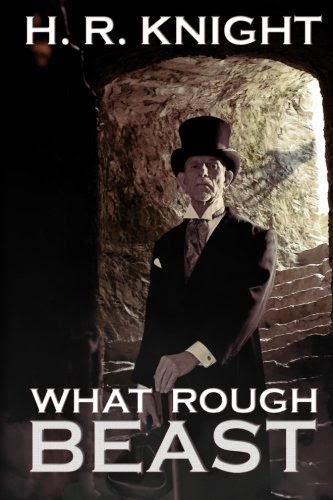 Harry Houdini asks Sir Arthur Conan Doyle to help him expose Maximillian Cairo—a spiritualist medium. But the two men underestimate Cairo. He's a master of the occult and the most debauched man in London. When they interrupt a magic ritual, a force for ecstasy and chaos explodes on an unsuspecting 1903 London. One by one, each of the people who attended the ritual are tainted by the touch of the monster. Each feels an ecstatic burst of creativity, only to succumb later to an act of uncontrollable madness. When the temporary insanity passes, each is left drained and broken. Soon Conan Doyle and Houdini face a locked room murder mystery that baffles even Houdini. And clues they find convince them that the thing they set loose has completely taken possession of one the people who attended the ritual with them. Even worse, the unearthly beast is determined to hunt them down, before they can figure out how to stop it. The proper Victorian gentleman and the exuberant New Yorker must team up to solve the murder and stop the thing they unleashed before it completely unravels their ordered world. In the end, Conan Doyle must face the monster alone and find the courage to literally embrace that which he fears most in order to defeat it.


Unfortunately, the new cover doesn't feature Houdini or any type of Houdini-themed image. Here's a tip to all you publishers of Houdini fiction; put the old boy on the cover for crying out loud! Don't make it this easy for me to pass up.