Massimo Polidoro, author of Final Seance: The Strange Friendship Between Houdini and Conan Doyle (2001), recently speculated on his blog that one of the paranormal mysteries we might see investigated in the upcoming Houdini & Doyle is that of Spring Heeled Jack, a real-life terror that gripped London at the turn of the Century. Well, I can confirm that Mario is correct. In episode 4, the boys will indeed tackle the mystery of Jack!

The true story of Spring Heeled Jack begins in October 1837. A servant girl by the name of Mary Stevens was walking through Clapham Common when a strange figure leapt at her from a dark alley. After immobilizing her with a tight grip of his arms, he began to kiss her face, while ripping her clothes and touching her flesh with his claws, which were, according to her deposition, "cold and clammy as those of a corpse". In panic, the girl screamed, making the attacker quickly flee from the scene. The commotion brought several residents who immediately launched a search for the aggressor, who could not be found.

The next day, the leaping character is said to have jumped in the way of a passing carriage, causing the coachman to lose control and crash, severely injuring himself. Several eyewitnesses claimed the mysterious figure then escaped by jumping over a 9 ft high wall while babbling with a high-pitched, ringing laughter.

Gradually, the news of the strange character spread as incidents and attacks mounted. Soon the press and the public gave him the name "Spring Heeled Jack". 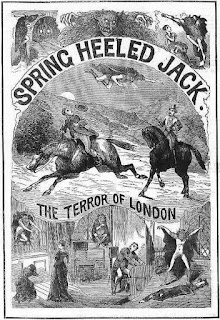 Spring Heeled Jack was described by people who claimed to have seen him as having a terrifying appearance, with eyes that "resembled red balls of fire." One report claimed that, beneath a black cloak, he wore a helmet and a tight-fitting white garment like an oilskin. Many stories also mention a "Devil-like" aspect. Several reports mention that he could breathe out blue and white flames and that he wore sharp metallic claws at his fingertips. At least two people claimed that he was able to speak comprehensible English.

A vast urban legend grew around Spring Heeled Jack. The devil was even renamed "Spring Heeled Jack" in some Punch and Judy shows. For decades, especially in London, his name was equated with the bogeyman, as a means of scaring children into behaving by telling them if they were not good, Spring Heeled Jack would leap up and peer in at them through their bedroom windows.

No one was ever caught and identified as Spring Heeled Jack, leading to numerous and varied theories of his nature and identity. The last reported sighting is said to have been made in Liverpool in 1904.

Back in August, while the Houdini & Doyle production team was filming stunt work in Liverpool, the Liverpool Echo captured what appears to be a photo of Spring Heeled Jack himself! So how are Houdini and Doyle going to solve the famous mystery? I guess we'll find out in Spring. 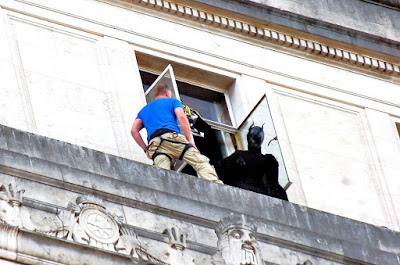 Houdini & Doyle stars Michael Weston as Houdini and Stephen Mangan as Sir Arthur Conan Doyle. The 10-episode series will air Mondays, 9:00-10:00 PM ET/PT on FOX in the U.S. It will also air on ITV Encore in the UK and Global TV in Canada. Premiere dates have yet to be announced.