Here's an interesting article about Eleanor Fletcher Bishop who willed Houdini $30 million dollars. Researcher Mallory Ditchey uncovered this while she was working for the Houdini miniseires in 2013. Silverman mentions this in Houdini!!! The Career of Ehrich Weiss, but this is a nice expansion and one wild story. Click the link below to have a read at History Buff.


I Accidentally Uncovered a 19th Century Con Woman and Probable Murderer
[This website is no longer online. You can read about its disappearance HERE.] 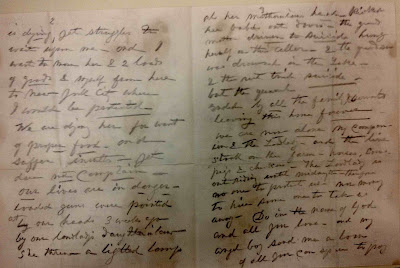 In the summer of 2013, I was sent to the University of Texas in Austin to research the life of Harry Houdini for a TV biopic. While perusing his collection of personal correspondence, I stumbled across the most insane letter I have ever read, sent by a woman who claimed to be “Her Royal Highness Princess Alexandra Nicholas.”


Thanks to Jos Mottershead for the tip.
Written by John Cox at 6:42 PM