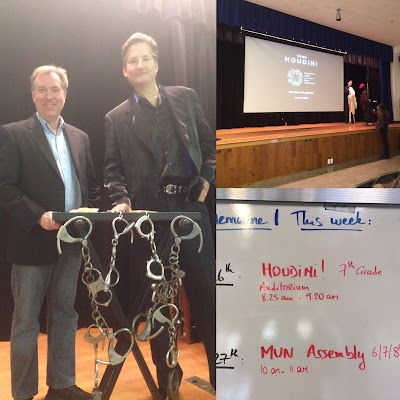 On Tuesday I had the great pleasure of giving a talk about Houdini to the 7th Grade class at the International School of Los Angeles a.k.a. LILA. This was a tag-team talk with the great Joe Fox who demonstrated some of Houdini's magic and escapes. Joe did the Kellar Rope Tie, Spirit Slates, escaped from handcuffs and showed the students a real straitjacket. But Joe really brought the house down when he extracted a 4-inch lock-pick from his nose!

The students were attentive and enthusiastic, and I was very impressed with how much knowledge of Houdini they already had. True, their teacher, Anna Scottie, had assigned them a Houdini biography to read (Harry Houdini: Death Defying Showman by Rita Thievon Mullin), but during the Q&A, I could see they had already dug beyond the text. One bright young man asked about "conspiracy theories" surrounding his death. The Miracle Factory's Todd Karr, who arranged this event, informed me that his daughter, Sierra, had developed a particular interest in Bean Giant handcuffs. Looks like there's a new generation of Houdini Nuts in the making!

The students also taught me a lesson about magic history. They seemed especially taken with the story of the Mirror Handcuff Challenge, but when I mentioned that the handcuffs are today owned by David Copperfield, I could hear, "Who?" These bright young students, who knew the name J. Gordon Whitehead, had never heard of David Copperfield? 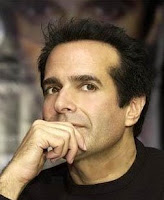 Afterwards, Todd told me that shouldn't have come as a surprise. They would know the name Criss Angel, but Copperfield has been off television for decades. That's when I realized I've been holding a false assumption. I believed Copperfield had broken through into popular culture and had taken a place beside Houdini as the very definition of a magician. After all, in the recent Marvel movie Ant-Man, a character reacts to the Ant-Man's metamorphosis as "some David Copperfield s***."

However, I'm now thinking that Copperfield, like so many other great magicians in history, might not transcend his era. Not that he will ever be forgotten within the world of magic. But a horse who escapes from its stable will never be called a "Copperfield Horse." (I use this example because I opened the talk with a clip of "Houdini Horse.")

This helps me understand how a magician as popular as Howard Thurston could today be largely forgotten outside magic circles. It also makes me marvel even more at how strong Houdini's hold is on popular culture. I guess a biopic every decade and 150+ books help. Not to mention that Houdini still tends to fascinate school kids.

As I was leaving the school, I noticed the car parked beside mine had a surprising window sticker. If you're as knowledgeable about Houdini as the 7th graders at LILA, you'll understand why I thought this was a little spooky... 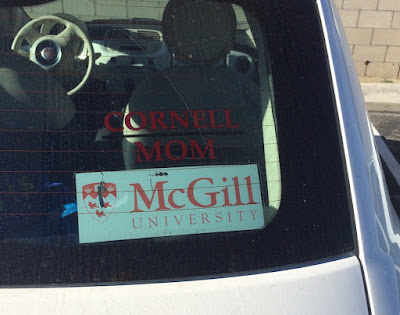 Thanks to Todd Karr, Sierra Karr, Anna Scotti, Milan Mendis, Anneli Harvey, and all the 7th Grade students at LILA for a wonderful visit.