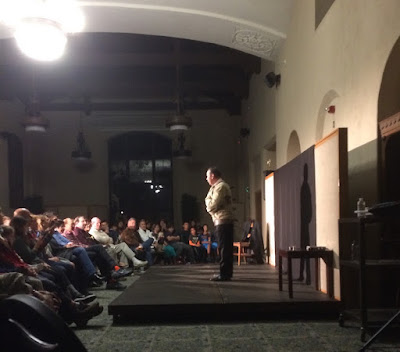 Last night I had the pleasure of attending Duffy Hudson's one man performance as Houdini at the annual meeting of the Friends of the South Pasadena Public Library in beautiful South Pasadena (where Houdini once visited the Huntington Library). It was a terrific show. His hour plus performance was extremely well researched and structured, delivering equal amounts of magic, drama, and information about Houdini's life in a unique way. Duffy clearly gave it his all and received standing ovation for his efforts. 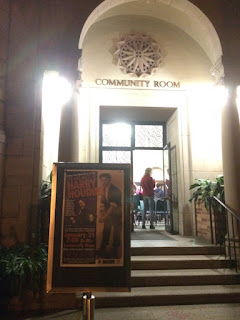 The Community Room in downtown South Pasadena was jam-packed with people of all ages (the event was advertised as "free and family friendly"). Duffy made his entrance as "Harry Houdini" bound in a period straitjacket. As he struggled to escape, he recounted the early days of Ehrich Weiss. When he spoke of how Ehrich one day poured coins into his mother's lap, coins sprung from his straitjacket as he finally broke free. Nice.

Hudson is an actor who specializes in one man shows (he also does Einstein, Edgar Allen Poe and George Burns), so all his "recollections" where infused with dramatic flair. His description of the torturous Hodgson challenge was a standout for me. He pantomimed the entire ordeal; his vivid depiction of how Houdini was thrust up in shackles by the strong man would have made Patrick Culliton proud (Pat's the great authority on the Hodgson challenge). By the time he bounded free, it was as if I was there in Blackburn applauding Houdini's escape.

Hudson also brought to life the Mirror Challenge (including liberating himself from his coat while cuffed), the Buried Alive, and his ordeal being trapped under the ice of a frozen river. Yes, this last one is a fiction, but Houdini himself would tell this story, so you can't really fault him for including it. And I was impressed that he located the escape in Pittsburg, as Houdini would tell it, instead of Detroit as established in Kellock (and Curtis). This told me Duffy knew his subject and really took pains to be Houdini that night.

Duffy also performed magic as part of the show. He teased out a terrific card trick and did the Needles as part of his finale. At one point he invited the whole audience to hold their breath as long as he, Houdini (3 minutes). Incredibly, one man in the audience did it!

Missing from the evening were mentions of Houdini's aviation and movie careers. Also, being Houdini, he couldn't necessarily recount his the details of his own death. But nothing felt lacking. There were many young people in the audience, and unless their parents explained to them the nature of the show, it's amusing to think how may will carry forward a memory of once "seeing Houdini." 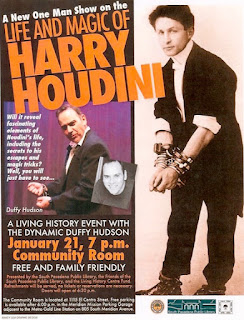 Afterwards, people lingered and there were pockets of conversation about Houdini. I introduced myself to Duffy and was flattered that he was familiar with my blog and it had aided in his research. Up close, I could see he was wearing a Masonic pin on the lapel of his tuxedo jacket. Like Houdini, Duffy is a Mason, so this was a nice authentic touch.

I learned about this show last minute, so I felt lucky to have attended, and was happy to come away with one of the show posters the library was handing out. I didn't get great photos, but there was a photographer there from South Pasadena Now, so maybe some better images will show up online.

Here's hoping we will be seeing more of Duffy Hudson as Houdini.